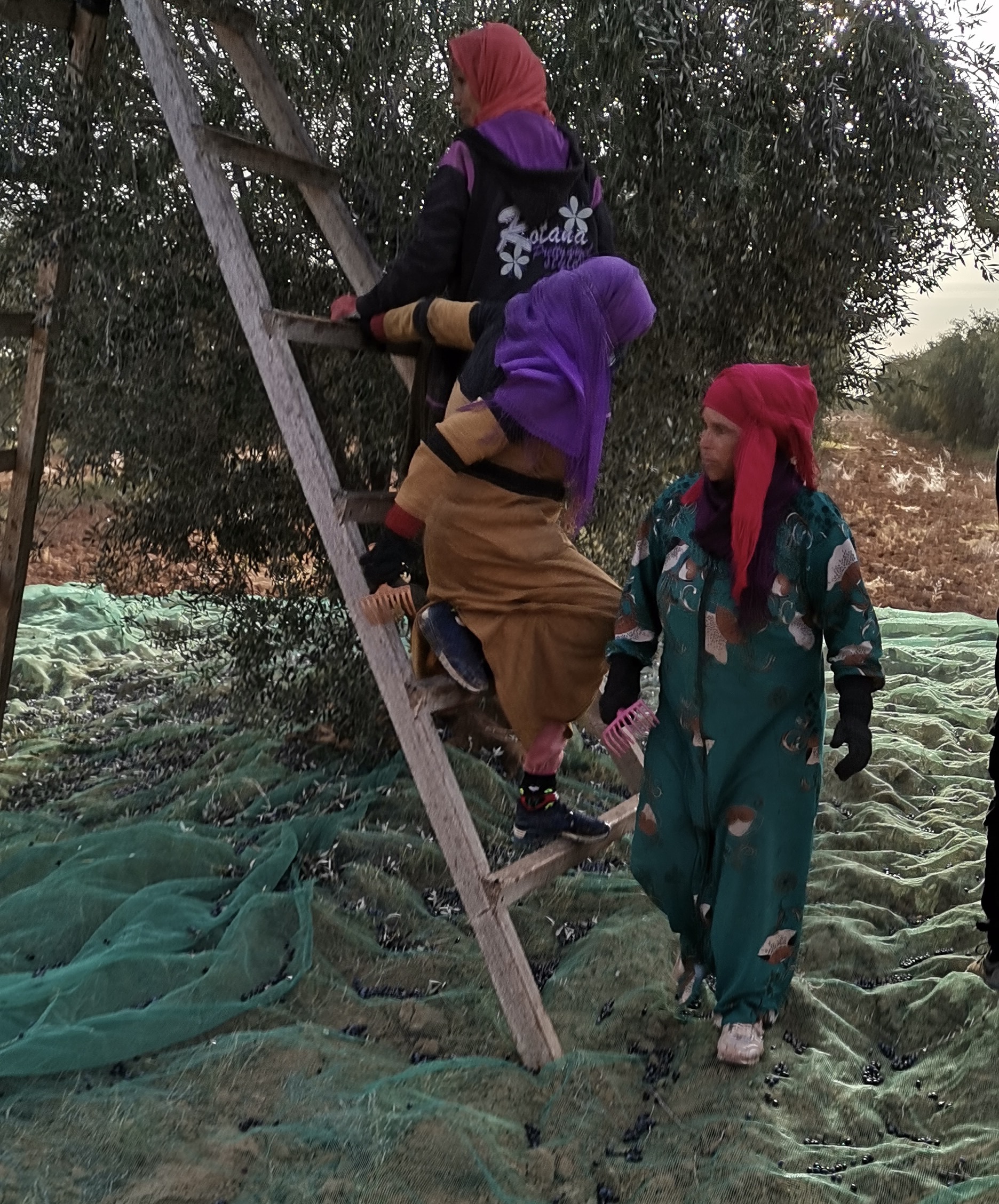 At a time when men are abandoning farming, the workers on the fields of Regueb are now armies of women ensuring food security for all Tunisians while still underpaid, uninsured and unorganized.

The invitation to travel deep into the countryside of Régueb, in the center of Tunisia, right in the bowels of its rurality, came from Nisrine Amri, aged 26, representative of a solar energy agency in Regueb. I met Nisrine on 11 December 2021 at the Congress of Social and Citizen Movements organized by the “Forum tunisien des droits économiques et sociaux”* (Tunisian Forum for Economic and Social Rights).

Together with her friend Intissar Akrouti, an unemployed woman with two degrees, aged 25, they came from Régueb to testify about the working and transport conditions of rural women, the subject of a workshop led by the association “Asswat Nissaa” (Women’s Voices), partner of the Congress. That day, Nesrine had upset the audience by evoking, in great detail, the story of her dog named Clash, faithful and assiduous companion of her mother Nebiha, who every day goes deep into the surrounding land and travels for miles to pick herbs, shoots and stems.

Replacing hay that is too expensive for the modest family purse, this precious food is served to her meagre livestock. However, one day the rickety cart (el battah) on which Nebiha stores and transports her burden of branches falls over her and immobilizes her. “Thanks to its wails, Clash alerted us to the accident my mother suffered and the place where she had fallen. Only the dog was able to empathize with my mother and her overwhelming workload. But Clash died recently, and my mother now leaves very early in the morning for the fields, without her guardian angel!” says Nisrine, her voice full of tears.

Nesrine Amri telling at the Palais des Congrès in Tunis about the hard work of her mother, Nébiha: "Only my dog Clash felt empathy for my mother". Video by Olfa Belhassine

Off to the “Nebiha’s lands”

This is how chance encounters paved a rich and touching path for me as I prepared to take another path to begin a series of reports on rural women in my country.

With a setback of affirmation, Nisrine Amri brushes aside the last traces of my hesitation: “In Regueb, all women are agricultural workers or have practiced this activity at some point in their lives. From a young age, all the girls devoted themselves to agricultural work, some to acquire school supplies, others to help their mother pick the olives, some to earn pocket money and others because they ended up coming back after completing a school or university course. By constraint, since the job offer for graduates is very limited in the region.”

Nisrine looks at me and insists: “Come to Regueb and you’ll see for yourself. Besides, we are in full “missra” -the season when agricultural day laborers are best paid. Since they are in high demand for the olive harvest, they receive up to 20 dinars (6.13 euros) a day instead of 10 (3.06 euros) to 13 dinars (3.98 euros) in normal times. Come to Regueb, we will offer you food and lodging!”

Two days later, I took off to Nébiha’s lands.

The small town of Regueb is located 280 km away from Tunis and 37 km southeast of Sidi Bouzid, cradle of the Tunisian Revolution of December 2010 - January 2011. A revolution of precarious people, small farmers and the damned of the earth marked by this feeling of disregard mirrored to them by a political power that has always favored the coastal regions over the Tunisian hinterland in its development plans. This Tunisia is steeped in rurality and small farming, where today, women represent the majority of the workforce: the female population providing nearly 80% of the agricultural workforce, according to figures from the Tunisian Ministry for Women’s Affairs.

With 30% of the total Tunisian agricultural production, the governorate of Sidi Bouzid, to which Regueb is attached, embodies the food garden that feeds a large segment of Tunisians. The land there is very extensive. There are large fields of olive, almond and apricot trees and orchards planted with carrots, onions, beans and vines along the road.

Oil mills belonging to wealthy operators-investors from the Sfax and Sahel region, some of which export their production abroad, demonstrate the significance and place of olive growing here. Herds of sheep, goats and calves appear in the distance in the pastures. However, in this territory with an arid and semi-arid climate, rainfall has been more than sparse over the past four years. For miles, fruit trees and young olive trees seem to be burned alive from drought and thirst.

At the end of the afternoon on Monday 13 December, we took the direction of the Amri house, in Sidi Ameur (11 km away from Regueb) named after a 15th century Muslim holy man from whom the tribe derives its genealogical origins. The Awamriya tribe to which Nisrine’s father belongs is now sedentary. It was the day of the weekly “souk” and the farms were deserted. The women flocked there the next day, at dawn, “at the hour when the countryside whitens.”

A body worn out by the sun and the cold

Arising in the heart of the olive groves at the end of a bumpy track of one and a half km, the household is modest, partly unfinished. With its beaten earth hallway, it was enlarged over the births of the six children of parents Abdellatif and Nébiha Amri, aged 60 and 58 years respectively, on a plot of 4 ha of land.

Water is precious here, because the territory is still not connected to the national running water distribution network. A well for household work and a cistern supplied with drinking water regularly purchased from an Agricultural Development Group attempt to meet the needs of the family. However, the couscous with the chicken from the tiny chicken family farm and with vegetables from Nébiha’s potager is abundant. The olive oil, which flavors the cucumber salad with a fresh herbal aftertaste, is extracted from the Amri olive trees.

We had dinner in a warm and relaxed atmosphere on two low tables surrounded by mattresses placed on the floor. A brazier tempers this cold December evening. Nebiha was discreet and served the whole table with a smile on her face. She only began to talk about her daily work once dinner was over and her family members, her husband and six children, had each gone about their own activities.

Between evocations and confidences, her life as a little female fellah unfolds, a woman whose body has worn out over the years, etiolated and wrinkled under the effect of the sun, the wind and the cold in order to draw the maximum resources from nature.

“As soon as my first baby arrived, full of determination, I declared to my husband: “I want this child and all those who will follow to finish their studies”. A brilliant student, I was forced to drop out of school at the age of 10 to obey my elder brother, he who had repeated his class several times and could therefore no longer share the long journey to school with me. I have kept a terrible frustration. Abdellatif (husband's first name) then replied: “I agree. But on the other hand, don’t ask me to buy you anything superfluous, not even a dress for Eid!” I have not stopped working since that day to make my children gain what I had lost.”

Nebiha was born in Deraa, a village near Sidi Bouzid, where her father was an olive tree pruner. Between the age of 25 and 30, when her children were at primary school level, Nebiha used to wake up at 4am to take care of her goats, hoe her olive trees and remove weeds in her vegetable garden. At around 5am, she used to go to her stoves, previously located outside the house, to prepare the “kessra” (local round bread made from fine semolina) on the wood fire for her children’s breakfast. She then took to the fields in search of herbs, leaves and twigs to renew the food reserves of her animals.

“There is not a single perimeter of olive trees in the surroundings that I have not crisscrossed. Walking up to five kilometers, this task takes me between three and four hours daily. One day, the owner of the huge neighboring farm who is from Sfax, met my husband.

“You should nestle your wife in your eyes’ pupil and close your eyelids to protect her and show her your gratitude!” he told him. How many times have I had accidents! How many times have I fallen with my load! How many times have I been kicked by the donkey pulling the cart! Nothing could prevent me from continuing to wake up at 3am in summer and a little later in winter: sending children to school, then to boarding school for college costs a lot,” recalled Nébiha Amri between tears and laughter.

When the rainfall was better, in May and June, Nebiha used to participate in the wheat harvest on the land of her husband’s family, on the other side of the main road. Abandoned, this perimeter turned into wasteland. In the region, the cost of irrigation has become unsustainable for small farmers, who are visibly impoverished under the combined effect of rising agricultural production prices and climate conditions. Today, with his eldest son, Abdellatif practices the drilling of boreholes for the farmers next door. When she arrives back home, mother Amri does not allow herself any moment of respite. Once the household chores are done, she gets down to her weaving loom, working until nightfall to produce margoum (carpets in colourful colours), blankets and burnous primarily intended for self-consumption or as savings value.

Nebiha is certainly aware of the value and strength of her work. However, not having a salary, she seems to assimilate some of her tasks as a continuation of her domestic prerogatives.

Whatever her chronic back pain, her rheumatism, her fluctuating tension, Nebiha has almost granted her wish of the past. Only has her youngest daughter is left to accompany to her higher studies in mechanics in Sfax. The bet is almost won. Even if today, none of her children holds a stable position commensurate with the courage of their mother, she expresses her pride with a smile lighting up her beautiful, tanned face: “The children from our people reach secondary school with difficulty. People here respect me and my husband for successfully educating our children.”

*The Congress of Social Movements and Citizens organised by the FTDES, a Tunisian left-wing NGO defending disadvantaged groups was held in Tunis between 10 to 12 December 2021.

This report was produced with the support of the Rosa Luxemburg Foundation (North Africa Office, Tunis).