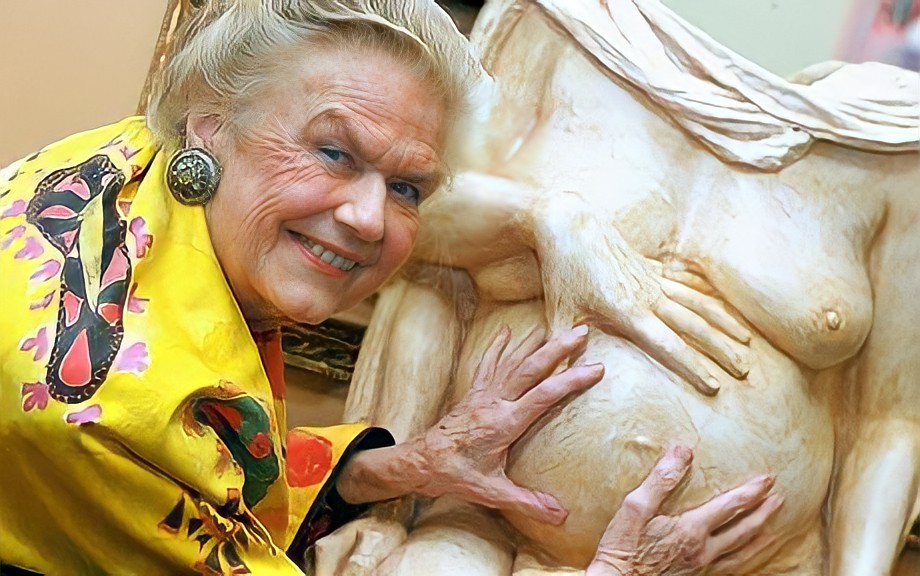 Did you say wellbeing? Well then, talk about Italian women’s reproductive rights

In Italy, law protects abortion, at least on paper. But in practice, women are faced with a national average of conscientious objectors reaching up to 70%, and over 90% in the Molise, Trentino Alto Adige and Basilicata regions.

In her book titled “Violence against Women’s Health in International Law” -for the time being published only in English (ed. Manchester University Press)- lawyer Sara De Vido has identified and investigated seventy cases of abuse against women’s rights to health and wellbeing. This is an excellent starting point to understand that violence against women is not just the one that is revealed in the “news” sections of our newspapers, but may be also often caused by medical institutions.

By using the Hippocratic paradigm applied to international law, Sara De Vido, who teaches at Ca Foscari University in Venice, develops the concept of “violence against women’s health” which, in relation to the notion of “violence against women”, questions and combines two dimensions of violence: interpersonal violence and violence brought by health policies with regard to abortion, contraception, forced sterilization and “bad motherhood” that generate, or create, the conditions for violence. 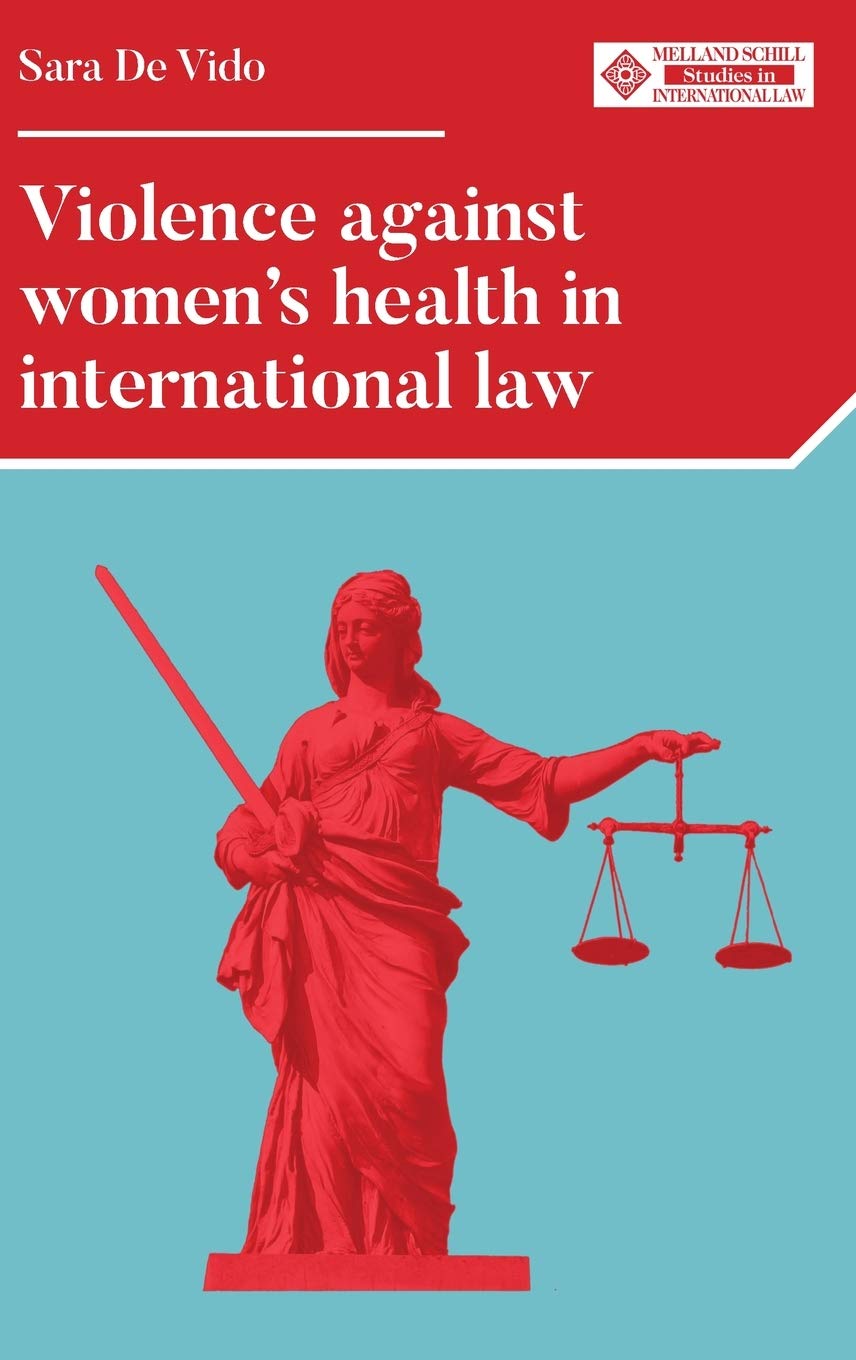 Her approach is quite innovative and has immediate relevance in this unprecedented and dramatic pandemic period. Indeed, many cases of violence against women’s health identified by the book emerged during the pandemic, when, for example, some countries restricted access to reproductive health services, as in Ohio and in Texas, where abortion is now considered a crime. Even when reproductive health policies are designed in the service of women’s health, they still violate women’s basic human rights: in Italy, the case of Umbria where pharmacological abortion was banned in day hospitals in 2020, caused a stir.

The RU-486, a pill that allows pharmacological abortion is an alternative to surgery that is difficult for women to access due to bureaucratic burden. Only a few Italian regions allow the administration of RU-486 in day hospitals while the other regions require a three-day hospital stay. In addition, it must be taken within seven weeks (not 9, as is the case in other European countries) and a “pause for reflection” must elapse between the request and the decision-making. Therefore, to date, the use of RU486 in Italy is neither straightforward nor widespread.

Every year, the world celebrates Safe Abortion Day on 28 September with the aim to remind people of the need to defend the right to voluntary termination of pregnancy and to decriminalize it (it remains illegal in many countries).

In Italy, law protects abortion, at least on paper. In practice, women are faced with a national average of conscientious objectors reaching up to 70%, and over 90% in the Molise, Trentino Alto Adige and Basilicata regions.

In Italy, seven out of ten gynecologists do not perform an abortion. The regions with the lowest percentages of gynecologists that are conscientious objectors are Valle d’Aosta (8%), Emilia-Romagna (52%), Friuli-Venezia Giulia and the province of Trento (53%). At the micro-territorial level, the differences are even more marked. In 2016, the emblematic situation of the province of Ascoli Piceno (100% of objectors) had even attracted the attention of the New York Times. So far, only the Lazio region has organized a competitive examination of non-objecting doctors to protect this right.

In Italy, 76,328 voluntary terminations of pregnancy were recorded in 2018, a figure to which we must add the uncertain number of clandestine abortions (between 10 and 13 thousand according to the latest estimates). Liguria is the region with the highest abortion rate (ratio of abortions performed to the number of women aged from 15 to 49): 7.8 abortions per thousand women followed by Emilia-Romagna (7.5), Piedmont (7.4) and Puglia (7.2).

Basilicata (4.3), Calabria (4.4), the province of Bolzano and Veneto (4.6) are the regions with the lowest percentage of abortions.

In Italy, 76,328 voluntary terminations of pregnancy were recorded in 2018, a figure to which we must add the uncertain number of clandestine abortions.

In 2018, 2,001 young girls were concerned (declining when compared to 2017 and previous years), of which 146 were aged under 15. In Italy, 37% of women resorting to abortion are married women, a percentage that goes up to 50% in Basilicata and Calabria.

Foreign women are strongly represented in these statistics. 23,000 of the 76,000 abortions (30%) are performed on non-Italian women, whose abortion rate is 2 to 3 times higher than that of Italian women.

Nonetheless, the data relating to conscientious objectors in Italian hospitals sends shivers down the spine. 69% of Italian gynecologists are objectors, and it’s not just for ethical reasons. As some non-objecting gynecologists explain, these questions are above all related to professional rather than ethical reasons, as doctors prefer not to perform abortions in order to be entrusted with less routine acts, which enhance their satisfaction and professional enrichment. This picture is far from comforting, and the Covid-19 pandemic has only exacerbated this situation.

Italy is also experiencing problems in other areas of reproductive health: one in three women delivers by caesarean section; data updated three years ago show that in southern Italy the number of caesarean sections, which according to the World Health Organization should not exceed 15%, has more than doubled. Italy therefore confirms its leadership in Europe for the number of caesareans performed.

On the other hand, it is important to highlight a positive development: there is a lesser use of caesarean section in Aosta Valley (20.1%), Tuscany (20.7%) and in the Autonomous Province of Trento (23.6%).

Enough silence: a social campaign to end abuse in the delivery room

“You will forget with time”. Even today, in the digital era, this is what women are still told and what they say among themselves, from the most mature to the youngest; as was the case hundreds of years ago when talking about the pain of giving birth.

Upon closer inspection, this is not a romantic viaticum: when it comes to women, it is self-denial that takes precedence. You were born to endure, that is what your body is made for. What matters is that you then have your daughter or son in your arms, and even if you cannot escape the biblical curse (“you will give birth in pain”) you will be rewarded.

This is certainly true but if, to natural childbirth pain, one adds the unnatural pain caused by the hospital staff, then the issue changes dramatically. Scientist Sheila Kitzinger, who has carried out an extensive study of this pain, shows that it can be largely avoided, provided that women are given knowledge tools about their own bodies. However, those who should facilitate and listen to the needs of expectant mothers behave as if women are an unnecessary and inconvenient burden.

In this case, it would be appropriate to speak of mistreatment, obstetric, medical or nursing violence: this opens a terrible Pandora’s box that highlights small or even gigantic practices of injustice towards women in the workplace. The problem also exists in Italy. The web has been talking about this for several years, and more than 19,000 women have contacted the Facebook page Basta tacere : le madri hanno voce (Enough silence, women have a voice), a campaign also supported on twitter with the hashtag #bastatacere.

When it comes to women, it is self-denial that takes precedence. You were born to endure, that is what your body is made for.

Even if in a virtual manner, in Italy this media has given rise to an emotional flow of stories, testimonies, exchanges, discussions and proposals supported by Human Rights in Childbirth. Now there is also a bill presented by the deputy Adriano Zaccagnini: “Measures for the protection of the rights of women and the newborn during childbirth, and for the promotion of physiological childbirth.”

On the Basta tacere page, it is suggested not to mention names and places. However, first names and surnames appear. 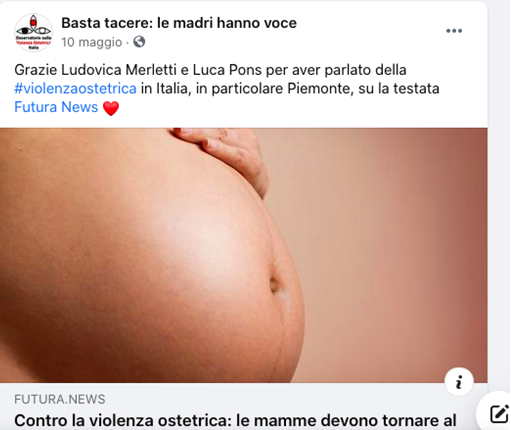 Lucia says that “The letters that hurt the most are those from specialist midwives, who tell of the shock between what they have studied and what they witness. But in the end it all ends with a “come on, think about your baby now, and forget the past. Aren’t we all survivors?”

Giulia writes: “I am an independent midwife from Rome and I support #bastatacere. For years, together with other colleagues, we have been fighting against violence during childbirth.”

Angela adds: “I appeal to pregnant women… get informed! Our own ignorance is often the perfect breeding ground for frustrated and inhuman caregivers who, due to the difficult time, act without neither tact nor delicacy and, in some cases, bordering on legality. Talk to other women who have already given birth in the hospital you want to go to, attend prenatal classes, ask for information at family planning centers, ask if they organize groups to visit labor rooms and childbirth, involve your partners. All of this useful to protect yourself and the life that you carry within you.”

The most important message lies perhaps in these last words: “besides the necessary complaints and a possible law, what is needed is greater women empowerment.”

A cultural movement of responsible women aimed at breaking the silence produced by a certain code of silence around birth, and which refocuses attention, not only on the creature that comes into the world, but on the one who gives life, is an extraordinary opportunity to strengthen relations between generations, acquire skills, and pass on ancient and modern knowledge.