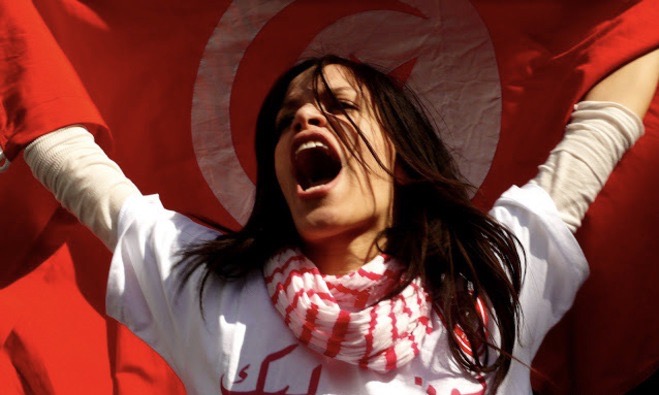 Feminism in Tunisia: a brief overview

Often inspiring other women in the region, Tunisian women have obtained their rights and freedoms since their country gained independence in 1956. In times of democratic transition, Tunisian women are seizing the opportunity of a context of freedom of opinion to continue their struggle for full equality with the men of their country.

Elyssa (Queen Dido) founded the city of Carthage, the ancient empire that challenged Rome. Al Kahina was a Berber queen and fighter against the Arab troops who led the Muslim conquest into these countries situated to the west of the Arab Gulf territories. The Sayda Manoubiya is a 13th century saint, the only one of her time, worshiped by the Sufi until today. Habiba Menchari was a feminist ahead of her time, who in a theatrical and unprecedented gesture took off her veil on the podium where she was speaking to a mixed assembly in 1929.

Is it the impact of these Tunisian figures, sometimes approaching myth and legend in collective memory, which gave the women of this country as from the 19th century and even before, the will to claim rights, a dignity and a place that patriarchal society denied them?

The historian Sophie Bessis would say: probably. In her book “Les Valeureuses” (Elyzad, 2017), she writes: “This feminine thirst for freedom, this insurrection against orders and dogmas is not an import commodity since it is part of a local history that is several thousand years old. Every era has produced it, and today, Tunisian women would only be the most recent and not the last component in a long chain, which draws on the past and prepares for the future”.

The Personal Status Code: a revolution

Certainly, the fate of Tunisian women has also benefited from a tradition of reformism led since the 19th century also by men to free their land from the archaisms and colonization. In 1930, Eltaher Hadad published his work: “Notre femme, la législation islamique et la société” (Our Woman, Islamic Legislation and Society). Although his colleagues at La Zitouna University persecuted him and above all accused him of apostasy, this manifesto to improve the status of women became a reference for the reformists of his time: he advocated for the access of women to education and to equality in inheritance; a battle that continues to this day.

Tunisia gained its independence on 20 March 1956. Building upon the reformist legacy, on 13 August, 1956, Habib Bourguiba, the first President of the Tunisian Republic promulgated a crucial legal text, the most avant-garde in the land of Islam: the Personal Status Code. Three of its articles are considered as quasi revolutionary. Article 3: “Marriage is only formed with the consent of both spouses”. Article 18: “Polygamy is prohibited”. Article 30 outlaws repudiation: “Divorce can only take place in court”. Women obtained the right to vote on the occasion of the municipal elections of 1956, gained the right to free and compulsory education in 1958 and the legalisation of abortion in 1973. A reform of inheritance law initiated in 1959 by Bourguiba somewhat limits inequality in this field and in 1981, widows obtained the right to become guardians of their children. They had been deprived of it until then for the benefit of a male relative of the family.

Zine Abidine Ben Ali, second President of the Tunisian Republic who seized power following a “medical” coup d’état in 1987, will consolidate this device as a means of winning the support of the female population against fundamentalists, his fiercest political rivals.

Indeed, in 1992, Ben Ali decided to delegate certain prerogatives of guardianship to the mother, who has custody of the children. Of course, he abolishes the “duty of obedience” of the spouse in the Personal Status Code. He establishes the reciprocal obligation of respect and consultation between spouses. He removes the mitigating circumstances from which the husband benefited in the event of the murder of his wife caught in the act of adultery. Of course, other reforms have been introduced in the Labor Code for better and equal pay between the sexes.

Yet, as Lamloum and Toscane point out, these advances do not prevent the legislator from remaining “a prisoner of the reference to traditions and customs, which confine women to their role of submissive mothers and wives. The dowry is maintained. The father remains the exclusive head of the family.”

A moment of great liberation from a very long dictatorship, the Revolution of 17 December 2010 – 14 January 2011 brought back its share of feminist demands. Its key slogan: “Work, freedom, dignity” was also chanted in the streets by women of all ages. As it is a mixed, secular uprising, led by young bloggers and human rights activists of different generations that broke out in public space, it shook the course of the country’s history. The movement resulted in a new Constitution adopted by the National Constituent Assembly on 27 January 2014.

Inheritance equality: a fight to be pursued

However, Tunisia’s democratic transition enables the return of the Islamists, long kept out of power by Ben Ali, the ousted former President. Their rehabilitation leads to the settling in of a political polarisation between secularists and followers of political Islam. This struggle manifests itself at the time of the Constituent Assembly (November 2011-January 2014) in a parliament dominated by the Ennahdha Movement (Islamist) and where the idea of the reference to Sharia (Islamic law) is back in force, as a source of law when drafting the new Fundamental Law. One of the biggest crises faced by the hemicycle took place in August 2012, when deputies of Ennahdha proposed an article on “complementarity” between women and men as opposed to the principle of equality between them. The idea provoked the ire of women and widely mobilized civil society. Men and women took to the streets in downtown Tunis on 13 August 2012, on the occasion of the Tunisian Women’s Day (anniversary of the Personal Status Code), to shout their hostility to the Islamist initiative. Following popular protests, the majority withdrew its project.

The final version of the Constitution stands for equality between “citizens” and “female citizens” (Article 21). Nevertheless, some grey areas persist: the choice of words is not innocent. It is highly “political”: The nuance allows a degree of leeway in the interpretation of the egalitarian principle that is still imperfect. This “incomplete” equality is due to the “original ambiguities” carried towards women by the Tunisian political culture since the 19th century when they were invisible”, explains historian Kmar Bendana in an article published in the collective publication, “Indissociables droits et libertés en Tunisie”, (December 2020, ADLI, Heinrich Boll Foundation).

At the same time, the issue of parity is advancing in Tunisia, that of inheritance equality is underway after a bill introduced in the Assemblée des représentants du peuple (ARP) (Assembly of People’s Representatives) by the Béji Caied Essebsi, the late President of the Republic, back in August 2018, but not adopted to date. Lastly, Tunisian women were able to obtain an Organic Law on the elimination of violence against women that the Tunisian parliament adopted on 26 July 2017. It is the culmination of a long fight started by feminists more than twenty years ago. Tunisia thus becomes the only Arab country to have such legislation and the nineteenth country in the world to combat violence against women through the instrument of law. Tunisia continues to inspire women in the Arab and Islamic worlds and elsewhere.