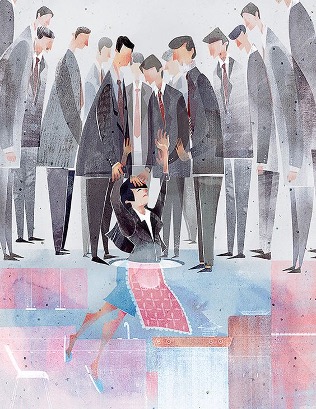 Women and the public sphere

The Festival of Mediterranean citizens, held in Catania from 2 till 5 June 2022, hosted a debate on the power relations and the persistence of gender discrimination. The subject is complex, multifaceted and requires rigorous discussions that vary significantly depending on the context. A journalist from Medfeminiswiya participated in the meeting to talk about the situation in Italy.

The exclusion of women from the public sphere is an ancient and deep-rooted phenomenon that has been reinforced over the centuries by dangerous and fallacious stereotypes and socio-cultural prejudices that are still widespread today.

According to these stereotypes, being submissive "by nature", the female gender is only suitable to carry out domestic duties and be submissive custodians of the hearth, devoted to loving care of family and children in a private, intimate and hidden dimension.

Blamed for being visceral, instinctive, uterine, unpredictable, unintelligent and devoid of rationale, over the centuries women have been removed from public affairs that are considered most important and, therefore, exclusively entrusted to men.

The historian Gerda Lerner has emphasized how this dichotomy between the public and private spheres is a social construct that exists from the very origins of patriarchy since it legitimizes the domination of men over women, the “great absentees” of the competitive, top-down and sexist societies in which we live.

The split between physis and nomos, nature and culture, has imposed the fact that in the Greek world, men were the only ones to deal with affairs of the polis, thus ousting powerful, wise and mysterious fermale figures such as Cassandra, Medea, Circe and Antigone, accused of madness or stigmatised as dangerous and violent.

Medieval art and literature have widely praised the “fairer sex” for its “pastel shades”, idealising it within castles isolated by high walls.

Despite the fact that gender equality is now sanctioned and protected at the regulatory level, as philosopher Maura Gancitano explains in an interview, many women are still victims of severe discrimination that is often introjected by themselves unconsciously.

Some truly believe that they can only feel fulfilled as wives, daughters and mothers, or by taking care of themselves, obsessed with what Naomi Wolf has called "The myth of beauty" established by the media.

Nevertheless, in most cases, the gender gap results from socio-cultural contexts that are still strongly misogynistic and sexist in which the non-inclusive or explicitly discriminatory use of language legitimizes unfair and penalizing treatments.

The situation in Italy

According to the social cooperative Azalea, devoted to the struggle against gender inequality, in couples with children in which both partners work, 22% of the time dedicated to the family in the 24 hours falls on women and 9% on men while on 14 million cases analyzed, parental leave is used much more by mothers (89%) than by fathers (11%).

The National Institute of Statistics also found that in the country, only 50.1% of women aged between 15 and 64 work, 33 out of 100 in the south, 64 in the north and 57 in the centre, and 19.5% work part-time unwillingly, that is, imposed by the need to look after family members, by the lack of services or by the company itself. The imbalance was further amplified with the pandemic: in 2020 in Italy 98% of women lost their jobs compared to 2% of men.

In a 2019 survey, Eurostat revealed that for the same skills a woman in Italy earns 4.2% less than a man and often undergoes a downgrading after maternity leave. About 30% of the wage gap is related to the over-representation of women in low-wage sectors: even today, only 28% of executive positions in private companies are entrusted to women and only 19.1% of top positions in public bodies, such as the Constitutional Court or the High Council of the Judiciary.

What kind of city do we live in?

However, it would also be important to ask ourselves: who are the streets, squares, statues, parks, monuments, subway stops, public buildings of our urban contexts named after? What kind of message do these choices convey? And do the existing services really facilitate the life of inhabitants?

“When urban planners do not take gender into consideration, public space becomes masculine spaces by default,” writes Caroline Criado-Perez in a broad study conducted in the framework of Sex&the City, a project that investigates the needs of women in public spaces to redesign them through a more neutral, transversal and inclusive perspective.

Gender-based urbanization policies have existed for decades in Vienna, Paris and Stockholm but are only now starting to spread in Italy. Recent studies have confirmed that in many of our cities, nurseries are still very few and disorganized, toilets often non-existent or unusable, lighting is inadequate or absent and the lack of centres combating violence limits the places where a woman can pass alone without feeling in danger.

Male and female citizens therefore have a completely different experience of public spaces and the latter experience greater inconvenience especially in terms of mobility, unsuitable for their more local and fragmented way of moving to reconcile professional commitments and care work.

The fear or the real risk of suffering abuse and violence in some areas perceived as unsafe leads many women to limit themselves in the free use of public space in order not to expose themselves to risks, and this pushes many of them to spend more time at home than they actually should. Rachel Hewitt recently tweeted that “One study finds that the map of 14-yo girls’ day-to-day movements is 2/5 the size of that of their 11-yo selves, and only 1/3 the size of 14-yo male peers’ movements.”

It is therefore necessary to rethink and radically transform public space to make it truly equal in a way that it can be shared by all. More urgently than ever, women must actively participate in this process. The absurd stereotypes that have until now led to their exclusion and penalization must be identified and fought, even by ridiculing their childish claim of incontrovertible truthfulness.

There is certainly no lack of inspiring examples, starting with Marie Curie, the first woman to have received the Nobel Prize in 1903 and the first person to have obtained a second Nobel Prize in 1911. It is said that in an international scientific conference someone asked her : “Madame Curie, what is it like to live with a genius?” and she replied: “I don't know, ask my husband!”