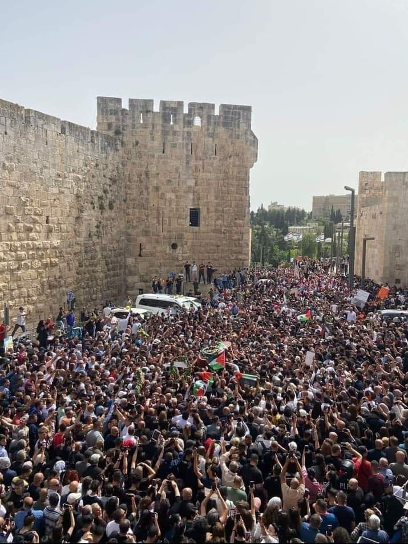 The assassination of Palestinian journalist Shireen Abu Aqleh by Israeli forces in Jenin while covering an Israeli raid, has sparked an unparalleled wave of outrage, while an immeasurable crowd of Palestinians thronged to her funeral. From Tunis to Beirut, the journalists of Medfeminiswiya also tell of their emotion at learning the news.

Since her assassination on May 11, 2022, around 6:30 am, while she was covering a raid by the Israeli army in Jenin, an unparalleled wave of emotion and indignation has swept through Arab societies, from Tunis to the West Bank. Even within our editorial staff, messages were pouring in:

"For me Shireen embodies the power of words in the face of the unspeakable injustice brought by a colonialist power, responsible for all forms of apartheid", writes Olfa Belhassine, Tunisian journalist from the network Medfeminiswiya. She continues: “Her words and her voice were targeted by the tanks… Her death particularly affects me and today I mourn Shireen with both despair and rage. We have lost a quality professional and a field reporter, fearless and concerned with the truth. Will her assassination go unpunished like so many others targeting journalists? Shireen's popular funeral, which highlighted how the repression continued, including after her absence, paradoxically further reinforces her presence and significance in Arab homes. Shireen has become the symbol of a free Palestine. We won't forget you! Free Palestine!”

Samia Allalou, co-president of the Medfeminiswiya network, adds: "If only we were together to cry and shout in rage... It's so hard to witness so much impunity, injustice, and indifference. But let's not give up, let's stay mobilized.”

Maysoun Odat Gangat, director of Palestinian radio Nisaa FM and member of the Medfeminiswiya network, also wanted to share her testimony: "The late Shireen Abu Aqleh was not only a leading Palestinian journalist, she was also a role model and a source of inspiration for the many women journalists who have undergone training and acquired experience on the air at Radio Nisaa FM, before pursuing a career in the various fields of journalism. She may be gone, but women journalists in Palestine have etched her and her work in their hearts and minds, and in that sense, she lives on. The Nisaa FM team and I mourn an immense loss: an influential Palestinian woman; a media icon in the Arab world. May our sister rest in peace!” 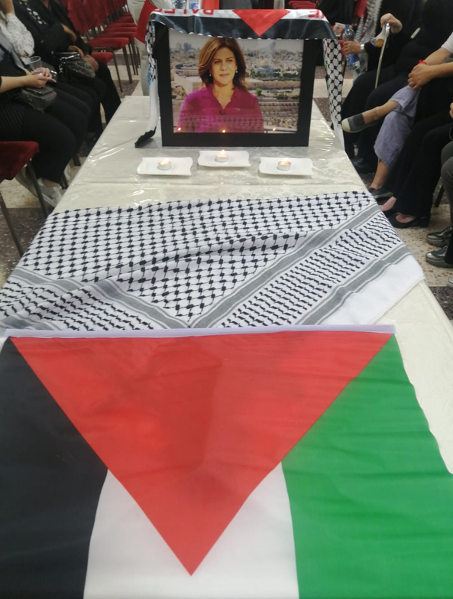 It has been two months since Shireen Abu Aqleh has surveyed the Jenin refugee camp to document yet another episode of violence by an occupying force that disregards the fundamental rights of the Palestinian people, including the right to inform and to be informed. Shortly after her death, Al-Jazeera denounced a “heinous crime, in complete violation of international law, which aims at preventing journalists from doing their job.”

Fifty-one-year-old Shireen had been a contributor to the Qatari channel since the late 1990s. She had covered many of the events that have sorely affected the history of Palestine, including the battle of Jenin, the second Intifada, the Israeli army’s countless incursions and military operations in the West Bank. She was also one of the key figures of highly professional investigative and field journalism who played an important role for young people in the region.

“I woke up on May 11 and checked my phone as usual” writes Maya El Ammar from Beirut, the co-editor-in-chief of Medfeminiswiya. “The first thing that caught my eye was the news that Shireen Abu Aqleh had been killed. I froze. For two hours I searched the internet in vain for signs that she was still alive, in a coma, and would eventually wake up! But she didn't. As a child, Shireen’s determination and bravery inspired me. As an adult, she became a source of inspiration to me for her calm and humility. In her life, as in her death, she reminded me of what Jerusalem and Palestine are like. Apart from religious and ideological dogmas, she made us understand, especially those of us who were not able to visit Palestine, how generous, rich and steeped in culture this place is, and above all how occupation has always been oppressive and brutal. I cannot express how angry I am with the world for its hypocrisy, double standards and injustice. My heart goes out to all Palestinians who are being killed, tortured, belittled and made invisible every day. Many of us support you and we will continue to support your cause, until our last breath.”

“As a child, Shireen’s determination and bravery inspired me. As an adult, she became a source of inspiration to me for her calm and humility. In her life, as in her death, she reminded me of what Jerusalem and Palestine are like”

On the morning of May 11, Shireen wore a helmet and a blue bulletproof vest marked "Press". It was impossible not to identify her as a journalist. Palestinian cameraman Mujahed al-Saadi, who happened to be standing at her side when she was hit, told the press: “A colleague was shot; I heard Shireen shouting to warn us that he was hit. There was another shot, I turned my head, then I saw her, lying on the ground. She was hit in the head, below the ear, by an extremely precise shot. It was a place that was not covered by her helmet. His words were confirmed by Ali al-Samodi, producer of Al-Jazeera channel, also injured in the field by the bullets: “It was the Israeli forces who opened fire. First on me, I was shot in the back, then on Shireen,” he said from Ibn Sina Hospital in Jenin.

Even dead, Shireen continues to be martyred. Her funeral was desecrated by the Israeli police who tried to disperse the crowds as she was taken out of the hospital, violently beating the men carrying her coffin, almost causing it to topple over.

Shireen Abu Aqleh hails from a Christian family from the Holy City who, just yesterday, advocated peace in front of the cameras, contenting themselves with asking for the truth to be revealed about the circumstances which caused Shireen's death.

We would’ve liked to see these scenes of repugnant oppression arouse the same indignation in the West, where public opinion is legitimately moved by the horrors the Russian military is inflicting on Ukrainians. We hope, however, that Putin's dominance does not turn into scenes of ordinary petty violence that no one will care about anymore.

Israel's abuses against the media are no novelty. Other Al-Jazeera journalists were harassed by the Israeli police, while a year ago, almost to the day, the Al-Jala tower in Gaza where the Qatari channel had its premises was bombarded by an Israeli strike.

Reconstruction of the facts and statements collected by Nathalie Galesne.