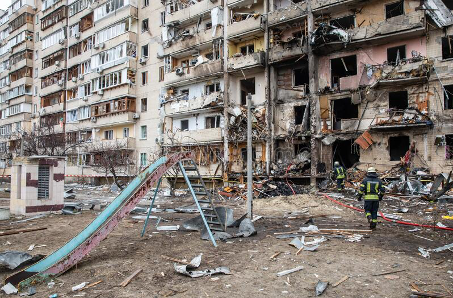 Ukraine: a war in the heart of Europe

Feminism is at the antipodes of the Putinian virile matrix that it combats, that of the violence in action in all the wars generated by a patriarchal system whose worthy representatives are erected across the world: Trump, Bolzonaro, Edogan, Salvini, Orbàn... to mention just a few.

Gutted buildings, bombed schools and hospitals, damaged nuclear sites, swelling waves of terrified people fleeing to the West, storming train stations or massing together for hours on the roads and at border posts. According to Filippo Grandi, United Nations High Commissioner for Refugees, 1.5 million Ukrainians have already left their country for Poland, the country hosting the largest number (half a million), Hungary, Moldova, Romania, Slovakia and even Russia.

“Nothing will ever be like before” is the expression that we most often hear from Ukrainians interviewed along their journey to escape the Russian bombardments. They are not wrong. If it is difficult to predict the outcome of this conflict, the analyses suggest it will be a long war, and undoubtedly of one of the most significant humanitarian crises of the 21st century.

As Russian feminists highlight in their call for an immediate end to aggression against Ukraine, indeed, absolutely nothing will be like before: “War is synonymous with violence, poverty, forced displacement, shattered lives, insecurity and lack of a future. It is inconsistent with the fundamental values and goals of the feminist movement. War exacerbates gender inequalities and sets back human rights gains for many years. War not only brings with it the violence of bombs and bullets, but also sexual violence: as history shows, during war the risk of being raped is increased for all women.”

Nevertheless, the war has entered its third week and nothing seems to stop Vladimir Putin’s military exhibition in the service of the expansionist claims clearly declared in the speech he gave on 24 February, shortly after having triggered the invasion of Ukraine. He said: “In the late 1980, the Soviet Union grew weaker and subsequently broke apart. That experience should serve as a good lesson for us, because it has shown us that the paralysis of power and will is the first step towards complete degradation and oblivion...”

In this hymn to strength and the exaltation of power, Putin also reveals a vision of the West - and indirectly of human beings - that is chilling to say the least. When referring to Europe and the US, he accuses them of seeking to “destroy our traditional values and force on us their false values on us...” which “are directly leading to degradation and degeneration, because they are contrary to human nature.”

But of which values and human nature are we referring to? “Anyone with a critical mind understands that these 'traditional values' include gender inequality, the exploitation of women and state repression against those whose lifestyle, identity and actions do not conform to patriarchal ideology,” replies the Russian feminist resistance movement against the war.

Feminism is at the antipodes of the Putinian virile matrix that it combats, that of the violence in action in all the wars generated by a patriarchal system whose worthy representatives are erected across the world: Trump, Bolzonaro, Edogan, Salvini, Orbàn... to mention just a few.

“Whether it is in the form of wars between States or civil wars resulting from fanaticism or social issues or the persecution of minorities, violence has been exercised by males, even if with the aid and complicity of women,” writes Lea Melandri, an Italian intellectual and feminist.

She asks: “How is it possible that even today, after all these debates on patriarchy and machismo, we are still unable to remove the mask of neutrality that prevents us from recognizing that those responsible for so many horrors belong to a single sex? What prevents the men that are sincerely convinced that they must work for peace in the world from questioning the “manly” matrix of violence?”

Because it is an essentially pacifist movement, feminism must denounce all wars, all imperialisms arising from this virile matrix. Therefore, what we blame Putin for - his invasion of Ukraine - cannot make us forget the Yankee crusade in Iraq launched on alleged evidence of chemical weapons, or even the Libyan disaster orchestrated by France. A bellicose gesture that only brings grist to the propagandist mill of the Kremlin.

Moreover, how can we fail to note the double standard – of European indignation at the current Russian bombardments in Ukraine and the recent past ones in Syria?

How can we fail to remember the weakness of the reactions of our governments and our public opinion when Russia relentlessly bombarded hospitals, schools, refugee camps and humanitarian convoys on Syrian territory and the devastation of the inhabitants of Aleppo with the use of cluster bombs, the same ones used in this new war? According to Chase Winter of the German media Deutsche Welle, Russian bombardments in Syria would have caused more than 18,000 deaths.

How can we fail to remember the weakness of the reactions of our governments and our public opinion when Russia relentlessly bombarded hospitals in Syria?

It is also necessary to recall the tragic fate of a large number of refugees from Syria, Iraq and Afghanistan, or sub-Saharan Africa, turned back by Europe and detained in outsourced camps outside its borders, when they do not simply die in the marine cemetery that the Mediterranean has become.

The reception of Ukrainians by the Polish and Hungarian states is of course commendable, but it is very selective since their borders are closed to other refugees who do not resemble them in color, religion and origins. In order to better control these migratory flows, walls have been erected in Hungary, and are being built in Poland.

France has just decided to grant free travel tickets for Ukrainians who have just landed in the country. This is again a matter of “double standards” since free travel does not apply to other refugees. This uneasiness is denounced by the unions of controllers, citing the risk of racial profiling and racist discrimination contrary to the universal tradition of human rights.

Feminism is pacifist, but this pacifism must be part of the long-term deep and radical changes that govern gender relations and necessarily passes through transmission and education (empowerment and emancipation of women, sexual and reproductive rights, gender equality, social and economic justice, the questioning of the patriarchal system by both sexes, etc.), which is why it cannot accept simplistic reductions and vain incantations.

My understanding and my solidarity therefore go both to Pivavorov and to Lila: Pivavorov has decided to desert from the army to stay with his family, while Ukrainian men, between 18 and 60, are automatically recruited under threat of imprisonment. Lila left the textile factory where she worked in Poland to return to Ukraine and take up arms “to defend her homeland.”