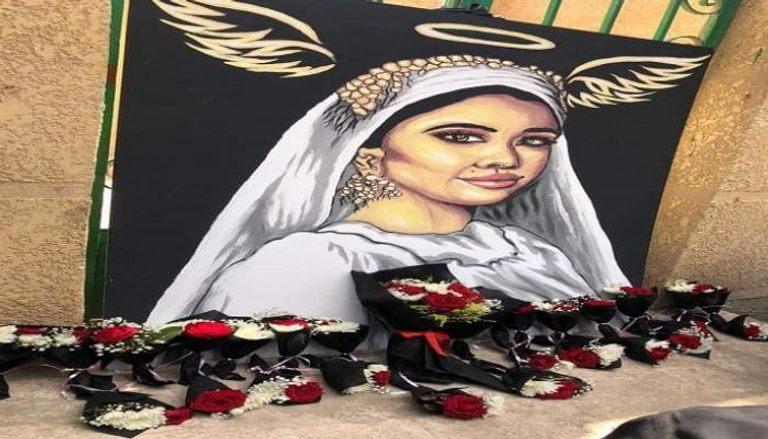 This is a critique of feminist politics, mine included. If we do not seriously begin to rethink the old tactics we have been using to dismantle patriarchy, what will be at stake is our death and the death of more of our sisters who are raped, harassed, and threatened every single day.

Imagine living in a place where on a bright sunny day, you get out of your house and hop on public transportation to go to college, only to find your stalker there, waiting for you. But stalking you does not merely quench his thirst for owning you. Instead, he stabs you and leaves you to bleed to death while passersby and colleagues stand there, watching.

Imagine living in a place where predators inspire and learn from each other; for example, an angry Jordanian guy gets inspired by an Egyptian stabbing stalker. He follows in his footsteps, walks inside the campus in another city, another country, and instead of sticking his knife into your flesh, he empties his gun into your heart- you being the woman he dearly “loves.”

Everything looks different in those crimes. The victims are different, the weapons, the geographies… but the only constant is the predator: man kills woman.

Now let’s talk about love. How worrying is it for a whole generation of girls to think that this is love? Truth is a "love" like this is not love nor romance, but rather outright evidence of how violent patriarchy provides men with an entrenched type of entitlement over women’s bodies, choices and lives.

Now, stop imagining and take a look at your newsfeed. The story, the horror, and the frequency of crimes against women are all more real and horrifying than your worst nightmares. The news about Egyptian Nayirah, Jordanian Iman, Emirati Loubna, and the hundreds of women slaughtered and murdered chase us to our beds. They remain our daylight nightmares and night terrors, if we ever get to sleep. But who are we then? Are we the future victims of some so-called “passion” crime, “honor” crime, domestic violence crime, and the list goes on?

What these crimes tell us today is that the bar has been set so low that dying from old age has become a far-fetched dream, almost a myth, for numerous generations of women. So, what do we do? And this is no rhetorical question; it is a sincere and serious one. Really, what do we do?

For over a decade now, feminist movements in the Middle East and North Africa region have been mobilizing against violence and oppression. Salient feminist agendas, various feminist waves and hundreds of highly funded projects and programs aimed at tackling and raising awareness about gender-based violence. Yet it is becoming clear to us how spreading awareness as a tool has been overly used, from sensitization sessions to training to workshops to media and digital campaigns.

Women’s rights organizations, feminist initiatives, and even traditional women's clubs, have all raised awareness about violence and discrimination. But awareness-raising campaigns are themselves tired of us. How wouldn’t they be when we have exhausted them and squeezed them dry. Hence my question: What happens when we reflect on awareness-raising as a feminist tactic and try to re-question it?

They know what they are doing

To give the movement the benefit of the doubt, perhaps it is scary to acknowledge that after decades of sensitization and awareness-raising, we are now faced with what looks like a harsher reality: Men are no longer butchering women because they are “ignorant” or do not know that a woman should not be killed. Instead, they are now butchering them knowingly and willingly. Furthermore, they are validated by insights of some accomplice bystanders observing feminist reactions, denouncing them, and deflecting the conversation from the horridness of the crimes to the “feminist hate men” and “angry feminists” usual hymns.

How many times do feminists have to repeat that their agenda and struggles are a matter of life or death? Will that ever stick, or will it keep sliding from the public, like the "love" knives that keep cutting through women's flesh? In Nayirah’s father's words, "she is the one who was slaughtered, but we are the ones bleeding from agony."

A few big organizations have sadly fallen for this narrative. They have become discursively apologetic by diverting funding from women’s shelters to “men-powerment” (men empowerment) projects. They are redirecting funds to anger management sessions for men and propagating discourses about women being innately weak and deserving “kindness” and “protection”. They almost succeeded in turning a structural, socio-economic problem into a singular case of a violent, troubled individual.

Our imagination is saturated with horrors that end up materializing.
The question becomes: are we still capable of re-imagining what justice means?

Laws have existed for centuries, but they have rarely acted as a deterrent to violence or a vehicle for justice. At times, our silent vigils had to turn into chant carnivals while trying to balance out demands and oppose carceral activists’ widespread calls -including some feminists- for capital punishment in a region filled with political prisoners, and where budgets for the carceral industry are higher than bread subsidies.

We do not need more prisons, or police staff in neighborhoods, knowing police members are, more often than not, predators themselves. We do not need barbaric practices of capital punishment to solve injustice. What we need is a profound revision of the feminist tools we have been deploying in our region; a starting point to begin again, to come together again, to rethink justice as a structure and as a comprehensive socio-economic system capable of preventing violence from festering as the quotidian rule of existence.

Yes, this is a critique of feminist politics, mine included. However, if we do not seriously begin to rethink the old tactics we have been using to dismantle patriarchy, what will be at stake is our death and the death of more of our sisters who are raped, harassed and threatened every single day.

Our imagination is saturated with horrors that end up materializing. The question becomes: are we still capable of re-imagining what justice means and how to organize for a safer and fairer world? Atrocities accompanied by recycled solutions have been suffocating our imagination and suppressing it for so long, but it is specifically that part of our existence that we most need to lift ourselves up again and mobilize.