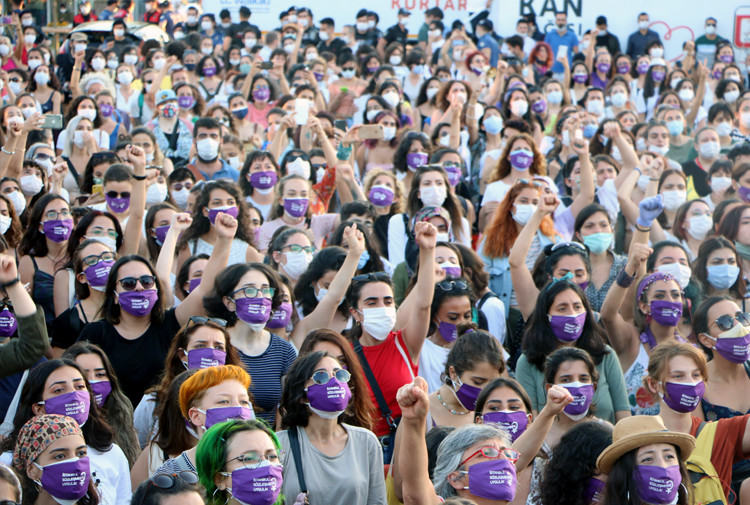 Women rise up over Turkey’s withdrawal from Istanbul Convention

Women in Turkey flocked to the streets when Turkey’s President Recep Tayyip Erdogan issued a decree at midnight on March 20, 2021 announcing Turkey’s withdrawal from the Council of Europe Convention on preventing and combating violence against women and domestic violence, known as the İstanbul Convention.

The Istanbul Convention is signed by 45 countries and the European Union. It is the most far-reaching legal instrument to prevent and combat violence against women and domestic violence, as well as to ensure protection for victims and bring perpetrators to justice. The convention is a legally binding Council of Europe treaty, covering domestic violence and seeking to end legal impunity for perpetrators. 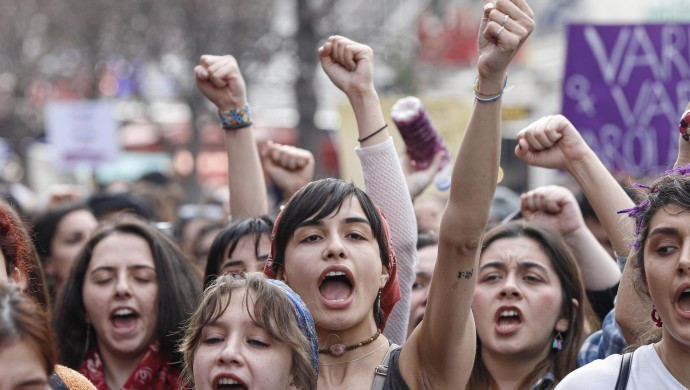 Ironically, Turkey was the first country to ratify the convention

The draft of the convention was adopted by the Council of Europe Ministers Deputies on April 7, 2011. It was opened for signature on May 11, 2011, on the occasion of the 121st Session of the Committee of Ministers which was held in Istanbul. For this reason, the convention was known as the Istanbul Convention and it came into force on 1 August 2014.

According to “We Will Stop Femicide Platform”, at least 3 women are killed every day in Turkey

In July 2020, Poland started its process of withdrawing from the convention, and as a result, thousands of people demonstrated to protest the decision.

What led to Turkey’s withdrawal from the Convention?

On November 24, 2011, the convention was approved by Turkish parliament. The Group of Experts on Action against Violence against Women and Domestic Violence (GREVIO), an independent body tasked with monitoring the implementation of the Istanbul Convention, published on October 15, 2018, an Evaluation Report on Turkey. The government was expected to provide the official translation of the report and present it to opposition parties, women’s organizations and NGOs in order to document and prevent violence.

Three years have passed since the report was published but it has since not been translated into Turkish by the Justice and Development Party (AKP) and no information has been provided about the report.

For three years, women’s organizations pushed the government to provide the official translation of the report, but they were targeted by “conservative” politicians and pro-government media claiming that the convention “destroys Turkey’s traditional family values and structures.”

The conservative groups also demanded the abolishment of the Turkish Law no 6284 on the Protection of Family and Prevention of Violence Against Women. 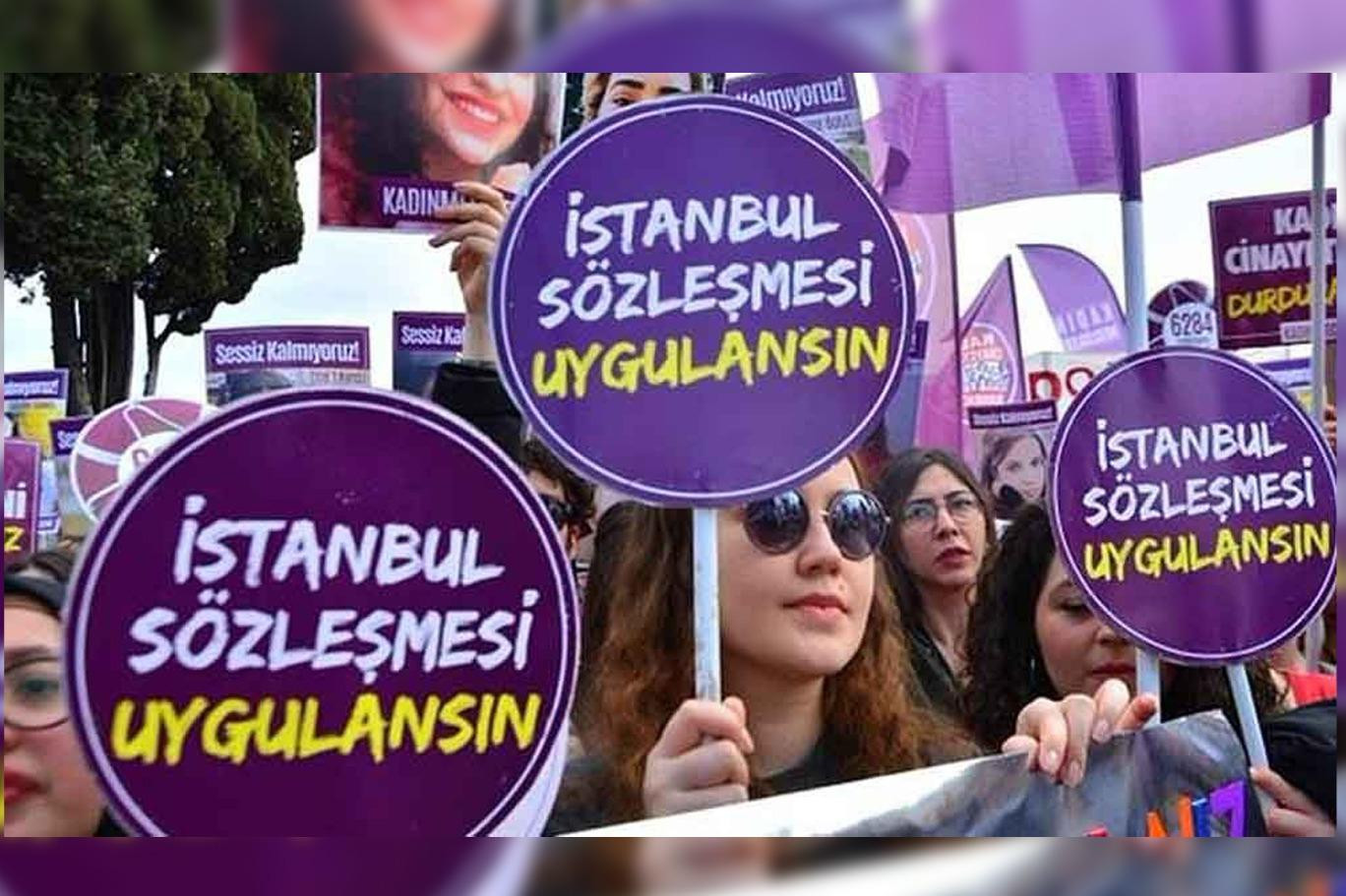 For weeks, the withdrawal from the Istanbul Convention became the main topic of debate in Turkey. In February 2020, Turkish President Recep Tayyip Erdogan announced that the Convention should be revised. During that same period, conservative media outlets and religious communities claimed that the convention “destroyed Turkey’s traditional family values and structures,” and “prepared a legal basis for homosexuality.”

The main debate on the convention was triggered in May 2020 by a speech by Ali Erbas, the Religious Affairs Director, targeting LGBTIQ+ people.

“Work on it and review it. If that’s what the people want then remove it… Whatever the people say, that is what needs to be done,” said Erdogan while calling on his ruling Justice and Development Party (AKP) to review Turkey’s participation in the Istanbul Convention. AKP Vice-Chair Numan Kurtulmuş said, “just as [Istanbul Convention] was duly signed, one can duly withdraw from the convention.” 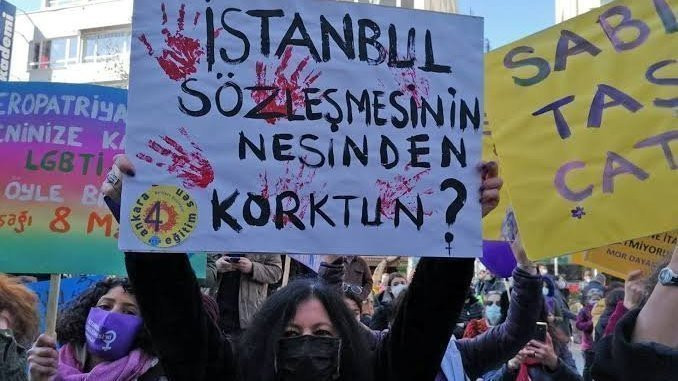 At least 300 women were killed in Turkey in 2020, the year when the government decided to withdraw from the Convention

Women took to the streets demanding the implementation of the Istanbul Convention. But whenever women protested, police attacked them and detained many of them. Despite all obstacles, women kept taking to the streets. According to Turkey’s “We Will Stop Femicide Platform”, at least 300 women were murdered in 2020, mostly by their partners, and 171 more women were found dead under suspicious circumstances. “We Will Stop Femicide Platform” says at least three women are killed in Turkey every day.

On March 20, 2021, Recep Tayyip Erdoğan announced Turkey’s withdrawal from the treaty with a midnight presidential decree. A nationwide curfew has been imposed in Turkey from 9pm to 5am due to the Covid-19 pandemic so women flocked to the streets in the early hours of Saturday morning across the country to protest the decision.

As women kept protesting the decision across Turkey, many bar associations have applied to the Council of State for the annulment of the decision, saying article 90 of the Turkish Constitution puts international treaties on fundamental rights above domestic law. Lawyers said Erdoğan cannot legally take Turkey out of an international convention ratified by parliament. 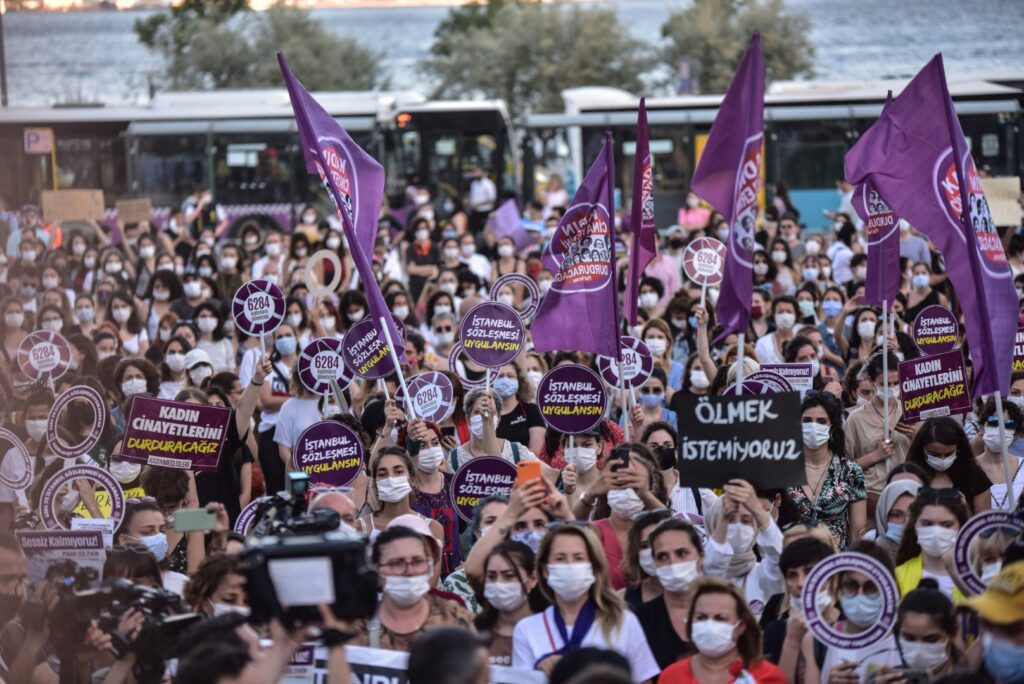 “If Turkey wants to become a member of the European Union it should stop acting like this; this [the entry] will not happen by withdrawing from the Istanbul Convention nor by shutting a political party that millions voted for.”

The Council of Europe leaders issued a statement in reaction to Turkey’s announced withdrawal from the Istanbul Convention and said, “Turkey was the first member State to ratify in 2012 the Council of Europe Convention on preventing and combating violence against women and domestic violence, opened for signature in Istanbul during the Turkish Chairmanship of the Organisation 10 years ago.”

“If Turkey wants to become a member of the European Union it should stop acting like this; this will not happen by withdrawing from the Istanbul Convention nor by shutting a political party that millions voted for,” said Petra Bayer, President of the Council of Europe Equality and Anti-Discrimination Commission (PACE).

UN Women also urged the Turkish government “to reconsider this withdrawal”, but heard no response from the government.