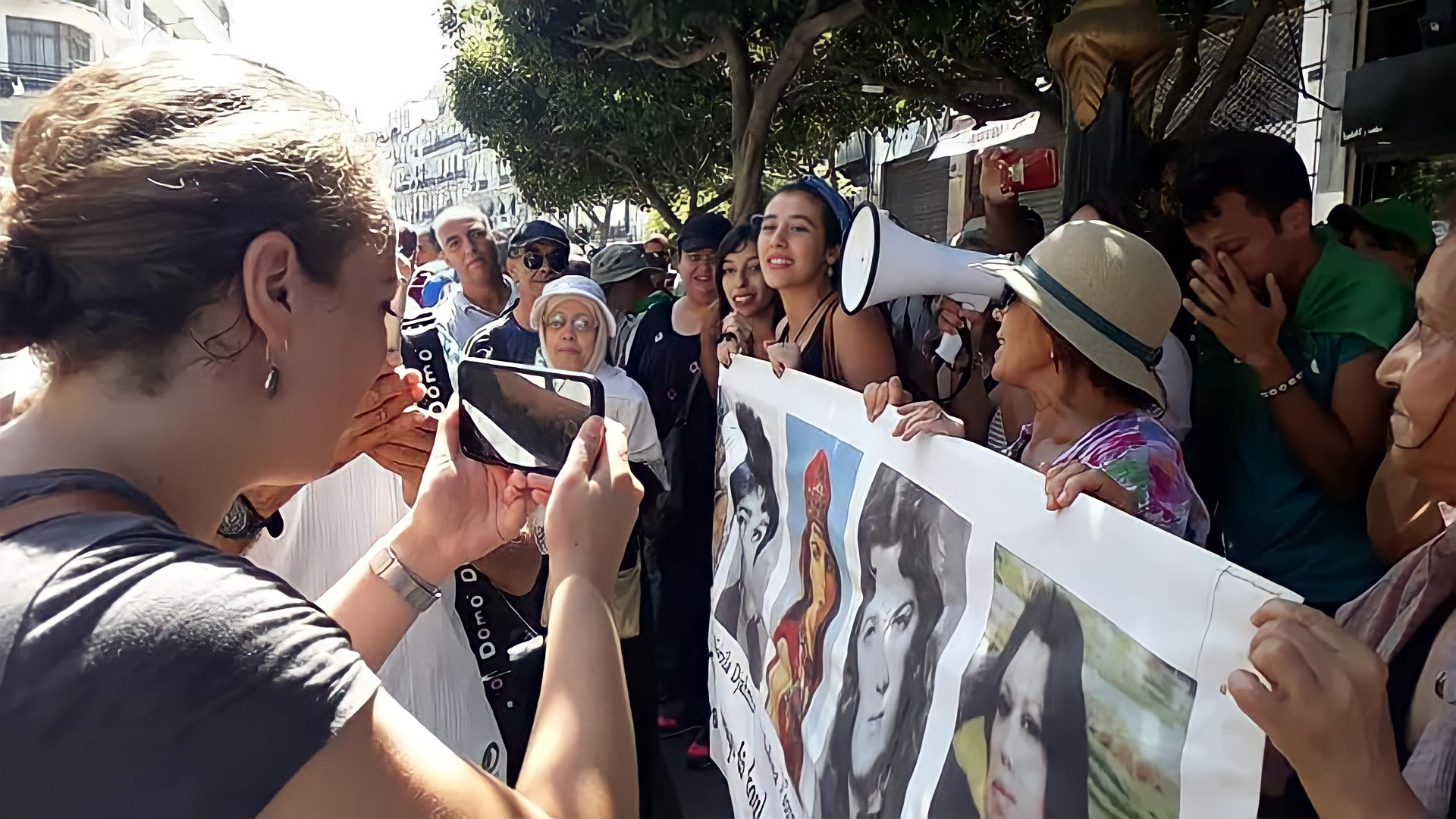 Feminists and the Hirak movement: a small space for high hopes

The Hirak is a popular and unifying movement but is it feminist? Considered as sacrilegious for some, the issue must be addressed as women should no longer be overlooked by History.

On Friday 22 February 2019, Algerians witnessed the incredulous sight of an increasingly dense crowd in the streets of the city chanting slogans against the fifth term of President Bouteflika. The protestors were predominantly young and older men, many of which coming out of mosques after the Friday prayers. Football chants, flags, first banners… The Hirak was born. The march still lacked colors. Women were few. They probably feared being frowned upon within male ranks, or being assaulted by the police, or serving Islamist or other political objectives.

They were not the only ones in this ‘wait and see’ position. The elder, the wealthier and the intellectual elite were still unaware of the nature of the claims. Social media and the debates that followed were gradually allowing the achievement of a clearer insight on the situation.

The Hirak wanted to bring down the regime and prevent the fifth term of President Bouteflika. The democratic demand gained solid ground on the following Fridays, attracting all social categories. Algerians of every political stripe and of all ages expressed their expectations, “civil and not military state”, “independent justice” and “eradicate corruption.”

Whether is it the government or their companions in the struggle against authoritarianism and repression, they know that hostility to feminism is evenly distributed.

The third Friday happened to be 8 March, the International Women’s Day. In Algeria, this day is celebrated with galas by local coroners and dance, roses and presents gifted by directors to their female employees to whom half a day of freedom was “given”. The Hirak was going to give activists much more than that. It provided them with the opportunity to demand their citizen rights and equality before the law.

Yet, at this stage, women place their claims on the collective agenda of democratic objectives. Once again, they put themselves in the service of the national interest.

“Today, we don’t want a rose. We want the sweet fragrance of freedom for our country” they sang. In the media and on social networks they were celebrated as “beautiful and rebellious”, as “courageous mothers” and as the worthy heirs of the heroines of the liberation war and resisters to the various occupiers throughout the history of the country. An air of déjà-vu. The peaceful “smile revolution” of which one of the strong slogans is “khawa-khawa” (we are all brothers) welcomes women with benevolence, respect and pride.

However, some women asked for more. Feminist activists imposed the specificity of their struggles by creating a “feminist square”. They added their own slogans: repeal of the Family Code, equality between women and men and denunciation of violence against women. At times, they were violently attacked by demonstrators who accused them of wanting to divide the movement and introduce “Western” demands into a popular and authentically Algerian Hirak.

This is not new for Algerian feminists. They have always been faced with “it’s not the right time”, or accused of importing “values that are foreign to our society” to silence them and marginalize their voices. Whether is it the government or their companions in the struggle against authoritarianism and repression, they know that hostility to feminism is evenly distributed. The episode is nonetheless quickly forgotten thanks to young people especially students who provide their support to protect the “feminist square”. Moreover, a movement that has established itself in the eyes of the world through its exemplary pacifism could not tolerate brutal machismo defiling its image by attacking women.

Among the many debates in the independent media and on social networks, men, but also women, were convinced in good faith that the success of Hirak would necessarily lead to that of the fight for women’s rights. But then, why not bring them to the same level as the other demands? Why is it that it is only feminists – a minority – who call for the repeal of the Family Code and equal rights?

Algerian feminists believe in the Hirak because it is the first time that a popular movement has united and transcended all divisions. Or almost. The cause of women’s rights has yet to be won because all those who walk on Fridays are not convinced of its legitimacy in the land of Islam. The brainwashing of mentalities by Islamic conservatism stands in the way of a popular demand for equal rights.

The sacralisation of Hirak does not tolerate pointing out the absence of women’s rights in major demands. Likewise, it has become uncomfortable to remember that only feminists supported the repeal of the Family Code. Indeed, how many men were there in the countless marches and feminist demonstrations that followed from 1984? Very few.

The comments of some Internet users on recent femicides give a measure of the loneliness of Algerian women in their struggle for equality. The Hirak is undoubtedly a quantum leap in the achievement of dignity and freedom but it is driven by urgency, to the detriment perhaps of other societal issues, to put an end to the current power and replace it with a democratic system of governance. But democratic how far?