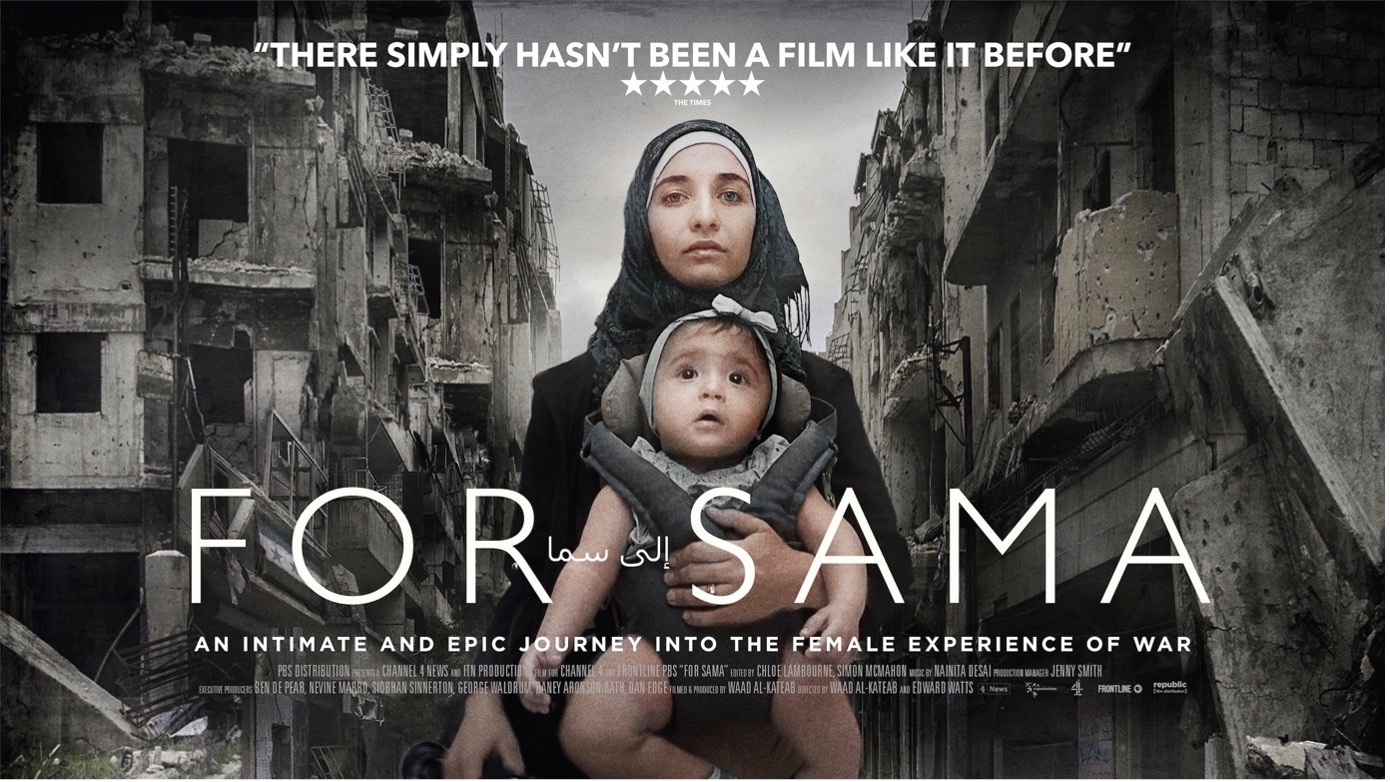 Screened at the Festival of Mediterranean Citizens of Catania, “For Sama” (2019) and “I was there” (2021) testify to the atrocities committed by the Syrian government, drawing attention to a wound forgotten by many although it has not ceased to bleed since 2011.

For Sama is “an intimate and epic journey into the female experience of war” that recounts the first dramatic months of the siege of Aleppo. Waad, a young economics student, runs to film the first university protests, the peaceful demonstrations in the streets and squares, the crowded sit-ins in front of the universities.

It is March 2011 and the same wind of change that has already passed through Tunisia and Egypt is blowing in the city. The population hopes to be able to bring change to a country suffocated by decades of dictatorship by finally claiming rights and freedom. Nevertheless, the movement is brutally repressed: the first corpses are fished out of the river and the attacks on unarmed civilians are exacerbated day by day.

A group of young activists set up a civil hospital in an abandoned building in eastern Aleppo. It is coordinated by Waad’s close friend, Hamza Al Khateeb, a young doctor who, under the bombs, asks her to marry him and becomes the father of little Sama. The film is a long video message devoted to Sama in which the young mother tries to explain to her daughter why she decided to resist and document the thousands of victims of the bombing together with her husband.

The citizen journalist combines different narratives, alternating that of war reportage to denounce the violence of the Syrian government and its ally, the Russian army, with the more intimate monologues on the pains and fears that afflict her. For instance, she wonders whether it is right to give birth to her daughter in that hell and risk her dying under the rubble instead of entrusting her to her grandparents who fled to Turkey.

“When I started working with Edward Watts, I didn’t want to censor or eliminate any of the horror I had witnessed. But I then realized that I had penetrated too far into the darkness. So, we decided to include Sama,”explained the director. “Life, tenderness. All mothers in a war zone experience a huge conflict between what they want to do and what they should do. At times, my faith in the Syrian revolution pushed me, while at others, I tormented myself for it”.

However, Sama, which means “sky” in Arabic, does not seem particularly frightened and in a short period of time she becomes the symbol of life and hope for the personnel of the only hospital that survived the constant air raids in the rebel area of the city.

On the occasion of the film screening in Catania (Sicily), Afraa Hashem, teacher, activist and co-star of the film, made a videoconference intervention from Turkey. “I was forced to leave Aleppo in 2013 with my husband and my three children but I continue to struggle for the rights of my land.”

There, Afraa ran five schools to provide education, shelter and support for about 300 children. “Waad wanted to tell the public about my work, as a woman and an activist, and began to film my lessons, the meals we distributed in class, the intimate moments at home. We immediately became close friends: during the siege we shared everything, united by the common struggle for dignity, freedom and justice."

Journalists from the international press interviewed Afraa often asked her why she persisted in staying with her family in such a traumatic and dangerous context. “This is one of the reasons why we made this film: to explain this choice, often criticized for the risk it entailed. The sense of responsibility kept us both there as long as it was possible: we could not have done otherwise.”

Today, both Waad and Afraa live and work in London with their families but continue to denounce a war that is becoming increasingly ignored by mainstream media and international public opinion.

On the other hand, in “I was there”, Sam Beiruty and Ameenah Sawwan tell the story of two women who survived the violence of the high security wards of Damascus. Their direct testimonies alternate with interviews with activists and black and white animations on the memories of the torture and inhuman conditions in which they endured for months with no contact with the outside world. With courage and dignity, the two protagonists recall the constant noise of bombs, the vulgar threats of the guards, the constant humiliations and physical and psychological abuses suffered already in the initial inspection, sarcastically called "Welcome party".

In the overcrowded cells, one of the two explains that sometimes they found themselves together with 20 or 30 women, some pregnant while others with children in tow, even very small ones. Many were terrified when their mothers were taken away for questioning. “In situations like these, the story of one becomes the story of all,” she says with emotion before adding: “on the walls I wrote my name and read many messages from those who had been there before me. Sometimes surviving is painful. I often ask myself: why did I make it and they didn't?".

The silent chants and a few drops of tea in the morning were their only distractions to deal with despair, loneliness and barbarism in a context where sexual violence is extremely widespread and is often used to send intimidating messages to their relatives. “It is one of the crudest tortures because it is very personal. We could perhaps feel stronger if we talked about it but, instead, what happens is a sort of collapse together with the sense of guilt for having allowed it,” confides the other protagonist in a whisper.

“We don’t know anything about 90% of prisoners in Syria and family members often lose track of them forever”, explains human rights activist Ameenah Sawwan together with her fellow Sam Beiruty, co-director of the documentary.

Today, she assures, the two protagonists live safely abroad. One works as a contemporary artist and the other is an activist of the Syrian women political movement and is often invited to television and radio shows. Like thousands of other refugees and political refugees who fled the conflict, both continue to raise European public awareness on the dramatic situation in a country where 1.5 million people are still in arbitrary detention today.