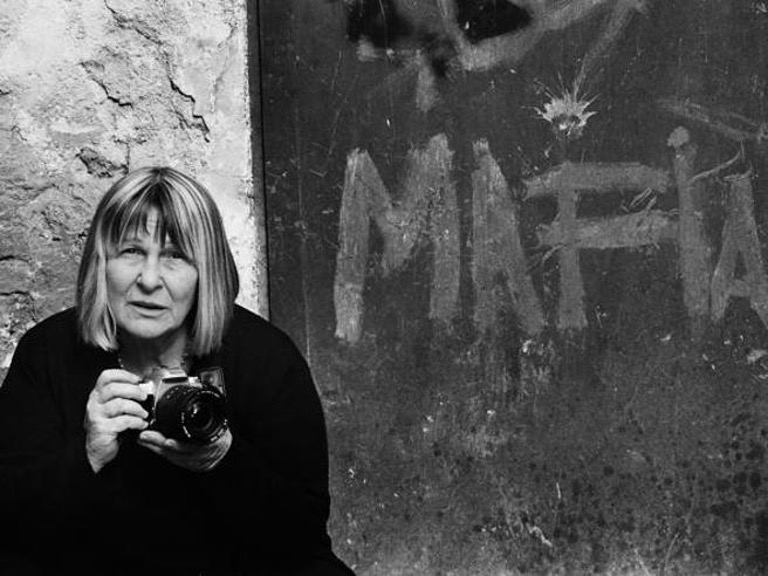 On 13 April 2022, the historic Sicilian photojournalist passed away at the age of 87. With her intense black and white shots, she told 40 years of tormented Italian history: from mafia wars to terrorism and mental illness to poverty, with a special focus on women’s lives and experiences.

Ironic, courageous, irreverent, nonconformist, activist always on the side of the underprivileged, Letizia Battaglia was one of the most appreciated and well-known Italian photographers across the world.

Born in Palermo in 1935, a seductive and imprisoning city, at the age of 16, she marries “the first who asked for her hand” to escape the suffocating paternal education. In the role of mother and submissive wife, she feels like “a restless middle-class woman” to the point of being hospitalized in a Swiss psychiatric clinic for two years. She comes out transformed: she meets other men, even much younger than her, and begins to work as a journalist.

In 1970, she moved to Milan and some newspapers asked her to add pictures to her texts. She starts with a portrait of Pier Paolo Pasolini. In 1974, the director of L'Ora asks her to return to Palermo to take over local and regional news. She becomes the first female photojournalist hired by a newspaper in Italy.

“I started to take pictures when I was forty,” she recalls in the touching documentary devoted to her. "I took horrible photographs and then slowly, between a horrible and a less horrible one, I realized that I had fallen in love with what I could express with the photo camera and that I could not express by writing. And that was the beginning of a love story.”

She portrayed women, children and people on the street, but she soon found herself documenting the first Mafia murder.

These were the dramatic and shocking years of the bloody feud between clans from Palermo and Corleone: a real civil war resulting in thousands of deaths. In the beginning, the victims were affiliates of the clans, but members of the institutions were soon also targeted by the assassins.

With honesty and rigor, profound humanity and indomitable civil activism, between 1974 and 1992, she witnessed heinous crimes, funerals and the devastating pain of relatives. She herself described the work conducted during that period as “an archive of blood” that the director Andò called “the poignant liturgy of the Palermitan Apocalypse.”

She immortalizes the great leaders of the Cupola[1] (dome) at the maxi trials, the interrogation of Judge Falcone[2] on the repentant Tommaso Buscetta, the encounter between Giulio Andreotti[3] and the Salvo cousins, loyal to the boss Lima, decisive in the investigation on the mafia-state negotiation. In order to denounce the horror of those years, she organizes an exhibition in Corleone, a stronghold of the clans close to Palermo.

“They all disappeared from the square and we were left alone with our photographs,” she recalls in an interview. “I was not fearless, [...] it was our duty: it was a dreadful time, we had reasons to be ashamed of being Sicilian. […] I was terrified but I just had to do it.”

In the beginning it was hard to be respected and grain credibility in an environment where she suffered heavy sexist discrimination. Unlike her male colleagues, she was always set aside when it came to crime scenes. She was often threatened and attacked by the mafia bosses. In front of her lens, the ferocious fugitive Leoluca Bagarella in handcuffs was annoyed by her presence and kicked her.

The photo of the body of Piersanti Mattarella, president of the Sicily region killed in an ambush in 1980 and held by his brother Sergio, current President of the Republic is among one of her most famous photos.

The portraits of Felicia, mother of the journalist Peppino Impastato, victim of the mafia, and of Rosaria Costa, widow of Vito Schifani, an escort agent of Falcone who died in the Capaci massacre are both magnificent and heartbreaking.

Like on that tragic Sunday in May, when two months later Falcone's friend and colleague, Judge Borsellino was killed, she ran to the crime scene but refused to photograph those who had loved and respected so much in life.

“The photos I didn't take are the ones that hurt me the most […]. It is as if I had disrespected them," she commented moved in an interview.

From that moment on she stopped covering organized crime.

Her artistic production relates to a range of different fields so she refuses to be labelled by the press as a "mafia photographer.” She captures the poignant beauty of her land, teeming with life and humanity, with an always empathic and penetrating gaze, often critical but never trivial.

With her unmistakable first blond, then red, finally fuchsia bob haircut and the inevitable cigarette, she participated in demonstrations for human rights and legality both as a citizen and as a regional councilor and city councilor. “It was humiliating. I did nothing and earned a lot of money every month. Everything was decided in other places,” she said, recalling her brief political experience with the Green Party.

In 2020, she shoots an advertising campaign for Lamborghini, photographing some girls in the foreground with two blurry luxury cars behind them and the controversy breaks out. She was even accused of winking at pedophilia by exploiting the bodies of very young girls in the most obvious cliché that combines women and cars. She replied firmly, shocked by the fact that the fiercest criticisms come precisely from the female circles that she frequents as an activist and as an artist.

In fact, her works on women are many, including theatrical performances, themed exhibitions and editorial projects, such as the bimonthly Mezzocielo which she directed from 2000 to 2003.

She photographed hundreds of little girls, her beloved “brats”, whose intense and wild eyes are a hymn to rebellion in reactionary Sicilian society and her “not at all sexy” adult nudes seem powerful aesthetic posters against the male gaze.

She achieved prestigious international awards, such as the Eugene Smith Award and the Mother Johnson Achievement for Life, and in 2017 the New York Times cites her among the 11 women who have marked our time.

"If I think about what I did, I feel it was worth it," she stated in an interview published a few days before her death, which sounds like a farewell.

To those who called her “a monument of our country” she would have replied that “monuments are only used to make pigeons shit” because she has always defined herself as “a person and not a photographer,”,explaining: “Success tires me. I prefer love."

[1] In the mafia’s jargon, la Cupola (the dome) is the top of the organization composed of the leaders of the most powerful gangs who agree on general strategies and criminal and economic operations.

[2] Falcone was one of the four magistrates involved in the “anti-mafia pool” together with Rocco Chinnici, Antonino Caponnetto and Paolo Borsellino. In the “bunker” of the Court of Palermo between the 80s and 90s, he conducted the main maxi trials with hundreds of defendants linked to Cosa nostra, the Sicilian mafia. He was assassinated with his wife Francesca Morvillo and three escort men, Antonio Montinaro, Rocco Dicillo and Vito Schifani, by the explosion of 1000 kilos of TNT on the highway section between the Punta Raisi airport and Palermo, on 23 May 1992. The mandator of the massacre was the boss Salvatore Riina, known as Totò, arrested in 1993 and convicted to 26 life sentences.

[3] Italian writer, journalist and politician, Andreotti was one of the leading representatives of the Christian Democrats, the party that ruled Italy for most of the last century. He was the politician with the most governmental posts in the history of the Republic: seven times Prime Minister and thirty-four times Minister. Brought to trial in Palermo for criminal conspiracy and mafia association, he was acquitted in the first instance due to “lack of evidence” but the appeal ruling established that he had committed the crime until Spring 1980, extinguished by prescription. However, he was acquitted with regard to the events subsequent to 1980.

Translation from French to English by Elizabeth Grech