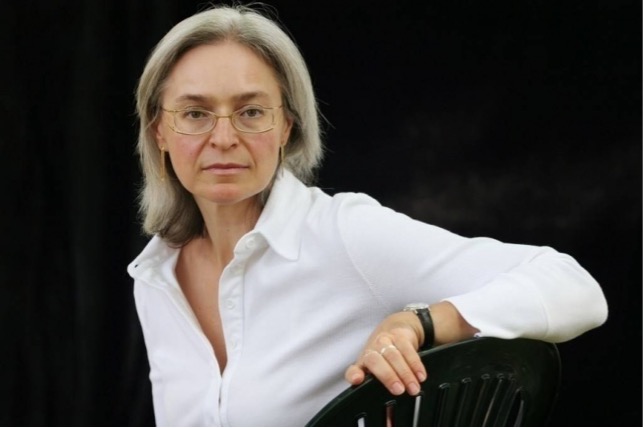 Anna Politkowskaja: Truth at all costs

She was the best-known Russian journalist abroad. She denounced the atrocities of the war in Chechnya and the rampant corruption by openly accusing Putin and the ruling oligarchy of violating human rights and restricting press freedom. After constant intimidation and threats, Anna was killed in 2006.

Anna Politkowskaja was born in New York in 1958. Her parents were Soviet diplomats of Ukrainian origin. At the age of 24, she started working for the Moscow newspaper Izvestija. From 1994, she was in charge of the "emergencies and accidents" section for Obščaja Gazeta and in 1998, for the first time, she was sent to Chechnya to interview the newly elected president Aslan Maschadov. In 1999 she joined the editorial staff of Novaya Gazeta, the independent weekly founded in 1993 by Mikhail Gorbachev and directed by Dmitrij Muratov, which remained her main newspaper.

In the more than 2000 articles and several books that bear her name, Anna Politkowskaja openly criticizes Vladimir Putin, denouncing the atrocities committed by the Russian army in Chechnya, Dagestan and Ingushetia, the violations of human rights and rampant corruption among the palaces of power strengthened by the escalation of censorship.

“When she started working with Novaya Gazeta, in June 1999, she was already a specialist in the defense of civil rights, which she had been addressing for years,” recalls her colleague Yaceslav Ismailov in an interview. “She had written several articles on refugees from Azerbaijan and was interested in the harassment and oppression suffered by the soldiers of our army. None of the Russian journalists who covered Chechnya in those years had ever tackled the issues she was dealing with. Hers was a dirty, thankless job, one of those that do not yield journalistic awards or official acknowledgments. It is hard to deal with Chechnya and if you don't die killed you still risk going crazy because the workload is huge. I knew how overwhelmed she was with requests for help, complaints, reports. She was a tired, tired and lonely woman, but she would never have given up if she hadn't been killed.”

She lived in Groznyj for months and traveled across the country witnessing abuse and oppression, the atrocious barbarism of ethnic cleansing and the disappearance of thousands of civilians in the spread of unprecedented violence. “They blew up the people who had suffered the worst torture so as to leave no evidence. They wanted to prevent the bodies from being found. We say no bodies, no problems," she stated in an interview. "As a citizen who pays taxes, I am outraged to see that the money I pour into the state coffers is used to finance the medieval torture perpetrated by the army."

She collected direct testimonies from the victims or their families, visited hospitals and refugee camps, interviewed Chechen civilians and militiamen and some Russian soldiers who confessed to her the abuses committed with the support of the prime minister, Ramzan Kadyrov, close to the Kremlin.

She witnessed the dramatic transformation of the women of the country, which in a touching article she describes as "zombies trained for martyrdom."

“Now, the dream of self-revenge for the loss of children, husbands and brothers is the highest ambition of thousands of mothers, wives and sisters. This is not because Islam and the adat (traditional norms) require it, but because they have no other choice. In the area of "counter-terrorism operations," people are condemned to take justice for themselves, because despite the presence of so many armed soldiers there is no protection of the most elementary human rights.”

Recognized and appreciated for her constant work on the ground, the fighters often mention her as a possible mediator and in the attack on the Dubrokva theatre in Moscow in 2002, she led the negotiations. However, she was prevented from dealing with the Beslan tragedy, where in September 2004 an armed commando took 1200 people hostage, including 130 children, in a school.

"There were several Russian journalists who in those days wanted to go to Beslan to speak about that dramatic kidnapping," recalls Sergey Sokolov, her colleague from Novaya Gazeta. “Two of them, however, never arrived. These are Andrei Babitsky and Anna Politkoskaya. It is no coincidence that both had good contacts with the former Chechen president Maschadov and they were therefore the only ones able to initiate a possible negotiation". She suffered an attempted poisoning on the flight to Beslan, as Russian security forces broke into the building, triggering a firefight that killed 386 people.

“I also thought that maybe I shouldn't have written everything I saw. Maybe I should have spared it so you could have lived in peace, convinced that the army and the government were doing their best in the North Caucasus. But I'm sure that when we open our eyes it will be too late”, she wrote in one of her last, tormented reports from the front. "The question that needs to be asked is this: what changed after I wrote that article and paid the consequences? Has our society benefited to some extent?”.

Speaking at a conference on press freedom organised by Reporters Without Borders in December 2005, she stated: "Sometimes, people pay with their lives for saying aloud what they think."

A few months later, on 7 October 2006, Putin's birthday, she was killed in the elevator of the building where she lives in Moscow. Two days later, her colleagues publish the draft of her latest investigation on the torture committed by the Chechen security forces linked to Prime Minister Kadyrov. It will remain unfinished.

"At the newspaper we were overwhelmed by telegrams, flowers and messages of solidarity," recalls the deputy director of the time. "There were thousands of people at the funeral: a huge crowd that we frankly did not expect, also because getting there, without metro or buses, is not easy. There were official delegations from 10 foreign countries." No Kremlin representatives.

"An elderly lady showed up at Anna's funeral holding a folder in which she jealously kept all her articles and explained to me that she only read what Anna wrote because she was able to make her understand how Russia has changed and how it is still changing today,” stated Lidija Jusupova, of the Caucasus Memorial Association, in an interview.

Rustam Makhmudov was sentenced to life in prison in 2014 for her murder. His uncle, Lom-Ali Gaitukayev, organizer of the crime, and his brothers, Dzhabrail and Ibragim Makhmudov, who would have helped to plan it, were also sentenced. Former Moscow police officer Sergei Khadzhikurbanov was also sentenced. The mandator has not yet been identified.

According to the Commitee to Protect Journalists (CPJ), Russia is the third country in the world for the number of journalists killed since 1991, surpassed only by Algeria and Iraq in the three-year period 1993 -96. Over the past 30 years, there have been 36 victims, 31 since 1999, the year in which Putin was elected prime minister. Six of them wrote for Novaya Gazeta.

After the recent approval of the law on administrative and criminal liability for the dissemination of fake news on the ongoing war, with sentences of up to 15 years in prison, Anna's colleagues received a second notice from the national media control authority. After 29 years of investigations and complaints, the country's most independent newspaper suspended its publications on 28 March 2022.

Translation from French to English by Elizabeth Grech