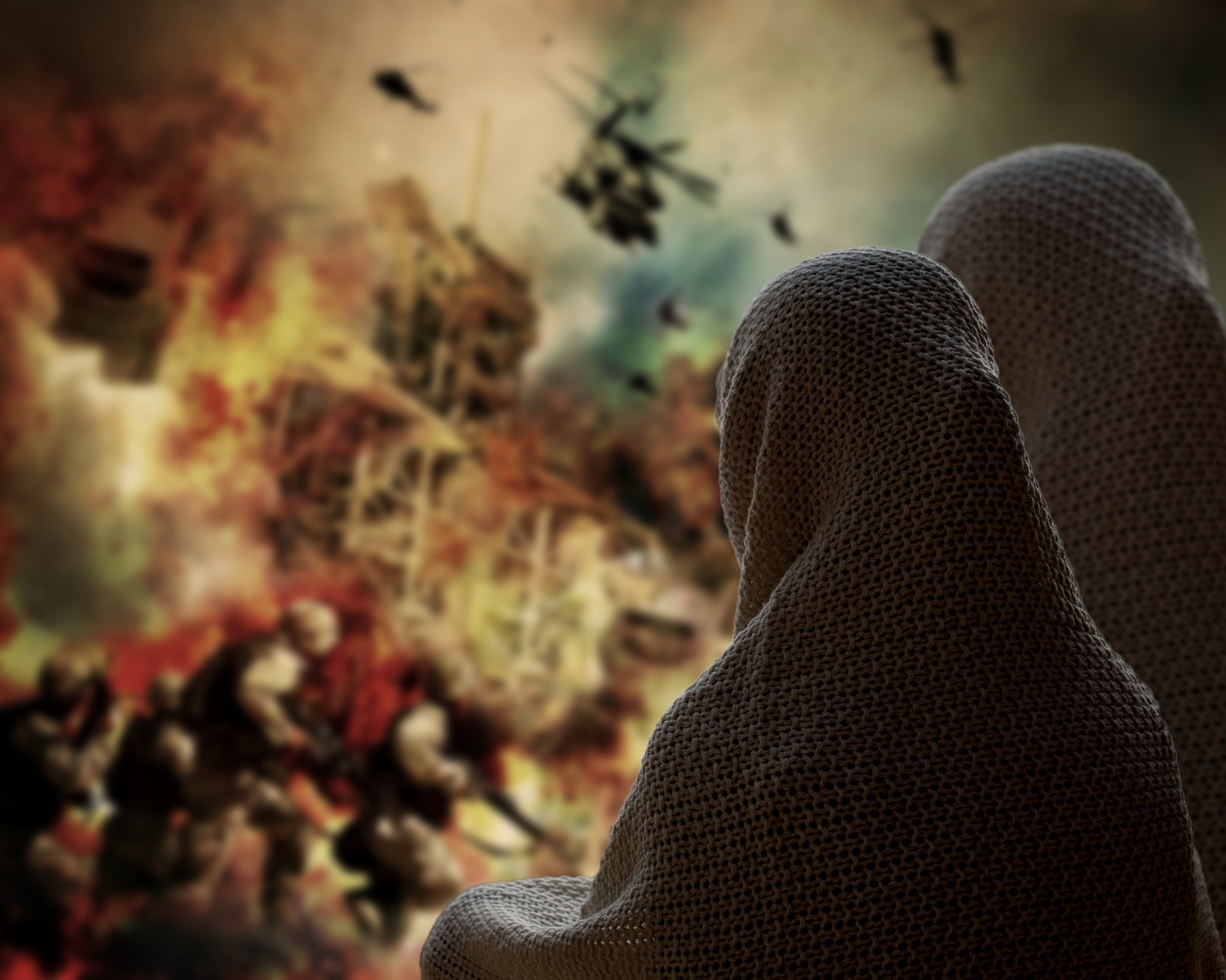 To this day, tribes impose patriarchal authority on their communities, specifically women, treating girls as nothing more than assets of the tribe. The tribal female then simultaneously becomes the so-called “honor” and “commodity” under different names used to describe what is essentially the same type of marriage: forced marriage, followed by rape.

If the 2021 Global Gender Gap report revealed that more than 135 years would be needed to close the equality gap between the two sexes, we would probably need more than 1000 years to do so in Northeast Syria and Iraq, particularly in all tribal areas which spanning Iraq to the borders of the governorate of Al-Quneitra in Syria, including Banyas Al-Hola in the Golan.

In those tribal geographies, the predominant culture that is biased against women and treats them as part of the family’s or tribe’s property, offers fertile ground for the worst types of gender-based violence. Women and girls are subjected to forced marriage, child marriage and the common practice of using women to settle scores, achieve reconciliations, take revenge, stop bloodshed, or settle disputes at the expense of their right to live like a human being as an independent entity with feelings and dignity.

This is all terminology that describe many different types of marriages that tribes still force women into until this day. We can differentiate between the different types by looking at how they are conducted and the intent behind them.

Al-Fasliya, Al-Diyya or Al-Dakka are marriages that are used to stop bloodshed between tribes, and entail marrying off a woman from one tribe to a man from another with the aim of reaching a truce and compromise between the two tribes, thereby closing the door on future quarrels or disagreements. This custom is still widespread in northern, central and southern Iraq, and in parts of Syria where tribes that follow it exist.

As for the tribal Al-Nahwa, it is used to prevent a woman from marrying another man as part of an old tribal custom that imposes on a girl the authority of her uncle who could prohibit her from marrying another man other than his son (her cousin), even if she spent the rest of her life not being able to marry. Al-Nahwa is therefore one of the threats used against the women of a tribe.

Al-Hiyar marriage, which the eastern parts of Syria are famous for, is defined as the practice of betrothing a girl to her cousin (the son of her paternal uncle) making her tied to him until she dies. She becomes prohibited from marrying anyone else and is thereby turned into a pawn for him in her own family’s home, even if he marries someone else.

Other types of forced marriages is Al-Badae’l marriage, which involves the legal guardian of the bride making it a condition of accepting as a son-in-law the man asking for her hand in marriage, marrying her brother to his sister or vice versa, as a type of exchange.

As for Qatsh Al-Radn, it involves a person visiting their relative to congratulate them on their newborn, and if the newborn turns out to be a healthy girl, the person would tear a piece of cloth from the girl’s clothing and express publicly to her father in front of the present guests “we have betrothed her to our son,” which would mean that she is now forbidden from marrying any person in the future other than the son who has named. Indeed, the family will then wait until both children become adolescents so that the marriage can happen.

Aqd Al-Shaleel (the contract of the sac of the dress) involves the guardian of the groom sitting on the floor and bringing his knees to touch the knees of the guardian of the bride, holding the corner of his handkerchief or his dress and then tying it into a strong knot that is hard to undo saying “I tied your sac, please don’t turn me away,” and this is in Bedouin culture is hard to say no to. He then cuts the dress, thereby expressing his desire to marry his daughter to the person entrusted with the task.

The difficulty of closing the big gap between laws and reality

Despite both Iraqi and Syrian laws making consent and the absence of coercion conditions for a valid marriage contract, about 40 women were forcibly married off to another tribe in Northern Basra in 2015 to end an armed conflict in that Southern Iraqi governorate known for the widespread use of weapons. This was followed by several similar incidents in the area to stop the bloodshed [between tribes] in a flagrant violation of the most basic rights of Iraqi women. In 2017, this has led to tens of suicide cases being recorded among women who fell victims to forced Al-Fasliya or Al-Nahwa marriages.

In northern Syria, a number of suicide cases were recorded among girls who were forced into Al-Nahwa marriage, as well as murder cases of women. The story of the girl from Raqqah, Hamda, comes in that context. Hamda who is from Raqqah city was murdered in 2009 by her cousin when he found out that her father will marry her to someone else after he had ‘promised her’ to him. The Syrian law does not intervene in Al-Hiyar type of marriage as it treats it as a special tribal matter. In fact, it is done within the framework of the personal status law when it proves “apparent consent” and provides witnesses.

The domestic violence law enshrined in the Iraqi constitution and that of Kurdistan’s regional government, as well as Article 8 of the personal status law No. 56 of year 2011 stipulate that “anyone who inflicts physical or psychological domestic violence, or who coerces another person into marriage, or forced marriage, or female genital mutilation, or marriage through Diyya [as a form of restitution to a victim from another tribe]” will face the penalty of imprisonment and paying a fine.

The Iraqi law according to Article 9 of the personal status law No. 188 of 1959, penalizes the act of coercing an individual, whether female or male, into marriage without obtaining his/her consent, or preventing them from marrying, with imprisonment up to three years of paying a fine, if the person coercing or objecting is a first-degree relative. But if that person is not a first-degree relative then the punishment of imprisonment could range from a minimum of three years and a maximum of 10 as the court regards the marriage contract as being signed through coercion.

The Iraqi and Syrian, including the Kurdish, feminist movements fought hard and often against these inherited and protected traditions in the context of the absence of new legislation or the non-implementation of existing laws in light of rampant lawlessness, widespread use of weapons, and the absence and fragmentation of the state’s authority. The Women’s Cultural and Media Center in Kurdistan and various human rights and women empowerment organizations in Iraq are some of the groups who have been involved in this feminist struggle. The efforts of those groups to save approximately a thousand women from the shackles of those tribal customs and traditions including pressuring the parliament of Kurdistan’s regional government of Iraq to pass an anti-domestic violence bill.

Despite all the international conventions and declarations, and some national laws in Syria and Iraq, the tribes continue to this day to impose their patriarchal authority on their communities

According to the Declaration on the Elimination of Violence Against Women “violence against women shall be understood to encompass… physical, sexual and psychological violence occurring in the family, including battering, sexual abuse of female children in the household., dowry-related violence, marital rape, female genital mutilation and other traditional practices harmful to women, non-spousal violence and violence related to exploitation.”

The Universal Declaration of Human Rights also stipulates that a person should have the absolute freedom to choose a suitable spouse, without being coerced or forced, and that this is a fundamental thing that cannot be compromised because it is directly associated with personal life, future and dignity.

The Convention on the Elimination of All Forms of Discrimination Against Women defines discrimination as “any distinction, exclusion or restriction made on the basis of sex which has the effect or purpose of impairing or nullifying the recognition, enjoyment or exercise by women, irrespective of their marital status, on a basis of equality of men and women, of human rights and fundamental freedoms in the political, economic, social, cultural, civil or any other field."

Despite all the international conventions and declarations, and some national laws in Syria and Iraq, the tribes continue to this day to impose their patriarchal authority on their communities, specifically women, treating girls as nothing more than assets of the tribe. The tribal female then simultaneously becomes the so-called “honor” and “commodity” under different names used to describe what is essentially the same type of marriage: forced marriage, followed by rape.

Rahada is a Syrian lawyer and women’s rights activist since 2003. She is a journalist whose work was published by several Arabic-speaking outlets, and a trainer specialized in the integration of gender-just perspectives and representations in media contents.