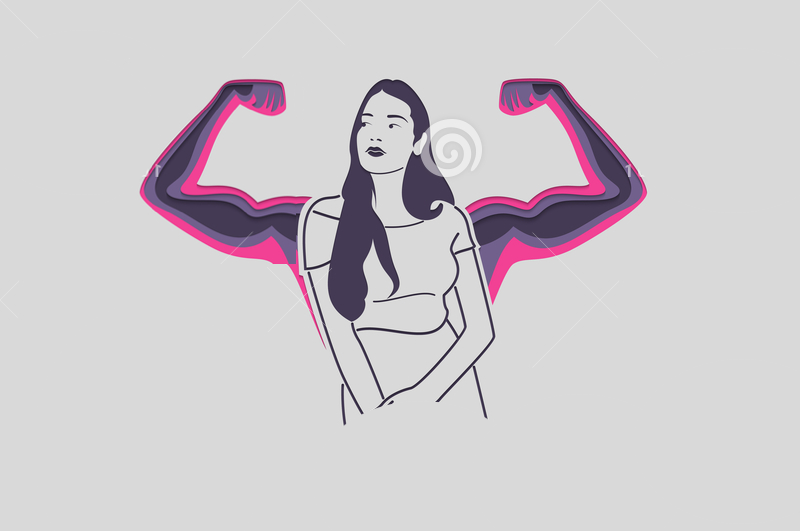 The daughters of Dany Bustros, Sylvia Plath, and Soad Hosny

We, the strong and independent women, daughters of Dany Bustros, Sylvia Plath, and Soad Hosny, are all without exception suffocating under the weight of silent suffering. Like my friend, we too tell ourselves “I want to escape”, sometimes more than once a day.

When Lebanese singer Elissa sang Aakas Elly Shayfynha (Unlike How Others See Her), she described in a nutshell the storyline behind the life of many women. She also portrayed the life of Dany Bustros who, despite being one of the most famous Lebanese dancers of her time, wasn’t spared hardship nor marital and financial distress, especially after the tragic incident of her son drowning at sea.

Bustros was married to Elie Hobeika, one of the most prominent leaders of the Lebanese Civil War. She led an unhappy life that was kept off the record until her suicide, while she remained in the eyes of everyone who knew her a carefree celebrity and a strong, successful woman.

When contemplating the suffering of strong independent women who made a name for themselves, like Dany Bustros, we notice that these women were often put up on a pedestal. They were perceived as having an unshakable demeanor, with no hint of worry, sadness, or even fatigue.

Many iconic female stars saw their journey end with suicide as a manifest result of the long-unspoken suffering they experienced, including Italian and Egyptian-born singer Dalida, and the fabulous writer Sylvia Plath.

For those who don’t know her, Sylvia Plath (1932-1963) was an American poet and novelist and a pioneer of confessional poetry. Despite gaining fame, thirty-year-old Sylvia sealed the kitchen door in her flat in London with tape and placed her head in the oven with the gas turned on. She had locked in her two children in their room and left a slip of paper in their crib that said to call the doctor who prescribed her tranquilizers. Perhaps she was hoping that someone would find her alive, but alas Sylvia was gone.

Similarly, there are many accounts that can be given about women who’ve left this world under bitter and mysterious circumstances, like Egyptian actress Soad Hosny, Syrian singer Asmahan, Lebanese singer Suzanne Tamim, and the list goes on. Their death remains a mystery till this day, yet it screams of the suffering they have endured against the backdrop of fame and success. In this light, it’s difficult to isolate women’s suffering from the patriarchal society that exerts pressure on women and discriminates against them. More often than not, women are bound to pay a high price in return for their success and independence.

Emphasis is more often than not placed on violence within impoverished communities, be it physical, sexual or verbal. We should bear in mind, however, that the number of reported cases of violence in Arab countries is still very low and therefore doesn’t reflect a true estimate of violence against women in the region.

What’s almost always overlooked in these records, though, are the women who were lucky enough to access education and employment and achieve personal growth but are nevertheless suffering. Contrary to expectations, these women who are considered ‘strong’ are also subjected to violence, one that can’t be easily reported or explained. They are often condemned because they are successful, and their chances at finding love, with all the pressure that comes with it, are even slimmer. Many traditional men feel threatened by the idea of committing to a woman who’s brighter than them, so they go out of their way to keep her in check.

Overlooked are the women who were lucky enough to access education and employment and achieve personal growth but are nevertheless suffering. Contrary to expectations, these women are also subjected to violence, one that can’t be easily reported or explained.

We can’t also dismiss the reports that come out every now and then, sometimes anonymously, warning us about how ‘spinsterhood’ is on the rise. They even go as far as to claim that this ‘phenomenon’ is closely linked to women’s independence, as if to say that women have to choose between independence and love.

A great deal of women does not escape intellectual oppression. When female activists or journalists express opinions that may challenge their conservative environments or won’t appeal to a certain group, they are often met with personal attacks from people who try to suppress them in the easiest way they know how, which is by taking shots at their personal freedom.

This doesn’t stop there, for women also experience wage discrimination and unequal opportunities in holding executive and managerial positions. Many of them are forced to accept whatever offer they’re given, despite the underlying discrimination and contempt for their gender and lack of appreciation for their academic and professional experience.

Shortly after my friend divorced her husband and decided to take off her veil and pursue higher education, he dealt her a hard blow by depriving her of her two children. He told everyone who knew her that she wasn’t worthy of being a mother and that she was a ‘loose woman’. Indeed, she did break loose from him, but it’s been five years since she last saw her children. During that time, she accomplished a lot, including opening her own company, but not without paying a heavy price. In our last conversation, she told me that she couldn’t take it anymore and was seriously considering leaving the country. “I want to escape”, she said.

We, the strong, successful and independent women, daughters of Dany Bustros, Sylvia Plath, and Soad Hosny, are all without exception suffocating under the weight of this silent suffering. Like my friend, we too tell ourselves “I want to escape”, sometimes more than once a day.

Pascale Sawma is a Lebanese journalist, author and novelist, with over 10 years of experience working in the media field as a producer, script writer, journalist, presenter and editor. She holds a BA in media studies and another one in Arabic literature. She is currently the senior editor at Daraj media, a reporter for Radio Rozana and a freelance contributor with several platforms and organizations, including Canal France International.