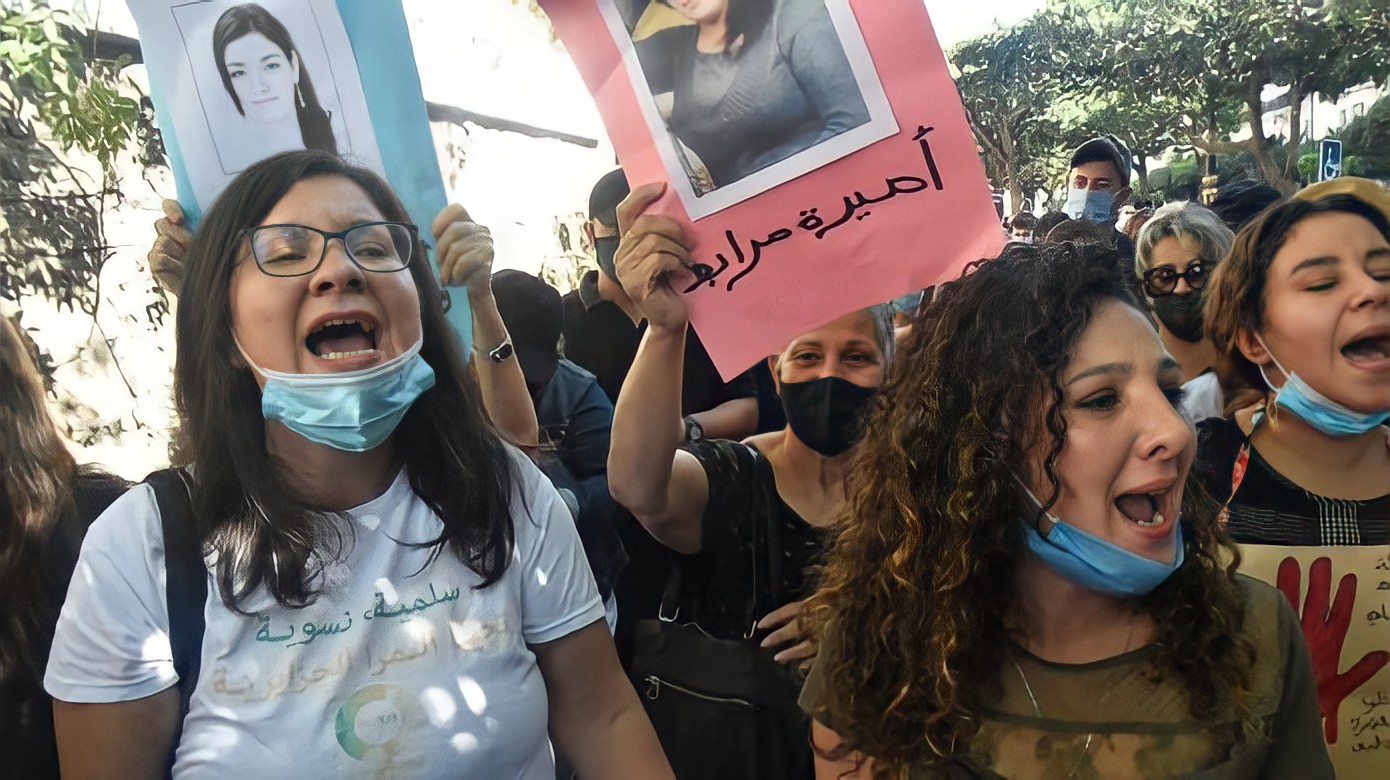 Law and women in Algeria: an alarming overview

Legislators did not remain completely silent in the face of the constant struggle and activism of Algerian women, but the fair and equal legal arsenal today is either battling with regression or fighting for survival. Depriving divorced women who remarry of their right to their children’s custody is but one example of the injustice suffered by Algerian women.

In a conversation with Medfeminiswiya, lawyer Aicha Zmit explains that the primary problem lies in “the decline in the robustness of articles relating to ending violence against women in comparison to the advanced stages that the feminist struggle in Algeria has reached,” in particular when it pertains to strengthening reporting and protection mechanisms. According to Zmit, this also includes post-protection mechanisms that will encourage women to file complaints or pursue the option to report abuse, hence breaking the old habit of withdrawing their complaints under pressure.

Algeria has ratified several international conventions related to women’s rights and that primarily aim to enshrine the principles of equality, justice and equal opportunity, explains Zmit.

Under this framework, Zmit says that the Algerian constitution “enshrined the principle of equality between the two sexes and expanded women’s political participation, like other constitutions in the region that ratified international conventions enshrining this principle.”

Zmit adds that “the first female Algerian minister was appointed in 1984, followed by many wins for Algerian women – while they remain superficial and hollow – as a result of women’s struggle for securing their right to run for [presidential] candidacy in 2004, and their success in doing so, with former member of parliament and head of Algeria’s Workers Party, Louisa Hanoune, running for presidency.

According to Zmit, “these wins were superficial” as some were achieved by giving some ministries [to women ministers] without granting them any real authority or making real changes during the era of the former president Abdelaziz Bouteflika. The ministries became an extension of the stereotypical images of women at home and of women who work to serve the patriarchal system. The Ministry of Education, for example, “was given to a woman, for ease of associating the teaching vocation with women, while the Ministry of Environment was also given to a woman, for ease of associating health and hygiene and sanitation with women too, and this did not help in breaking stereotypes of women’s roles in Algerian society,” said Zmit.

For tens of years, Algerian women participated alongside men in shaping their country’s history. At pivotal moments, they protected the land and shaped the nation’s identity, asserting their presence in public life and staying at the forefront of change in all fields, and in parallel they fought for the state’s acknowledgment and recognition of their contributions and rights. But their efforts did not necessarily translate into rights, or manifest in the best-case scenario in legislative progress. The election results of 12 June, 2021 are only a testament to the long journey ahead of the Algerian women’s struggle, as women’s presence in the national parliament declined by 8%.

“Constitutions are just texts. If there was real equality, we would have seen more women in leadership positions, especially when we count their big successes and capabilities in school or undergraduate education,” says Zmit.

Several Algerian feminists who spoke to Medfeminiswiya saw that “the killing of 80 women in Algeria between 2020 and early 2021 – with the absence of official statistics documenting the total number of actual cases – marks a clear regression in the feminist struggle,” in a country that has seen women and feminists organizing themselves for a long time now, since 1962.

As for Zmit, the women quota system did not do much. The parliament that saw a higher number of women representatives was called “the parliament of hairdressers” as legislations continued to have an ineffective role in combating patriarchal systems and defending women’s rights. This could have been achieved by organizing legal projects to revisit the penal code, work on activating the role of the judiciary and actually implementing international conventions.

The latest legal amendment that disappointed Algerian women was Article 66 of personal status laws that denied divorced women their right to their children’s custody in the event of their remarrying someone other than their former partner.

“Approximately 80% of the articles of the personal status articles of the Algerian Family Code is derived from Islamic shari’a (jurisprudence). It is time to revisit the legal loopholes and gaps between the legal script and actual implementation,” said lawyer Nsima Rawayniyeh to Medfemniswiya.

Rawaynyeh explains that “Article 66 represents an additional layer of discrimination. Forfeiting the rights of a divorced woman who remarries is unfair as the father continues to enjoy this right even if he remarries.” She describes what is “documented in courtrooms and divorce sessions as an injustice to divorced women who want to remarry but to no avail due to the pressure imposed by their ex-husbands and their threats of taking away their child/ren if they knew of them committing to someone else, while also evading all their responsibilities like providing alimony and secure housing for the children.”

Nadjoua is an Algerian independent journalist who has been covering Algeria’s news for JinhAgency/Women News Agency for five years. She is the editor of the cultural magazine «Foufoun » and a producer at « Radio web voix de femmes ». Nadjoua is also a member of the « Association for Women in Communication ». In 2017, she received a Masters degree in audiovisual journalism and new media from the « Ecole nationale supérieure de journalisme » in Algiers, and has participated since in several training programs covering local, economic and political journalism. Her activism pushed her to invest more in citizen journalism and in reporting with a radio station group specialized in covering women’s rights issues with Algeria’s most renowned female journalists.