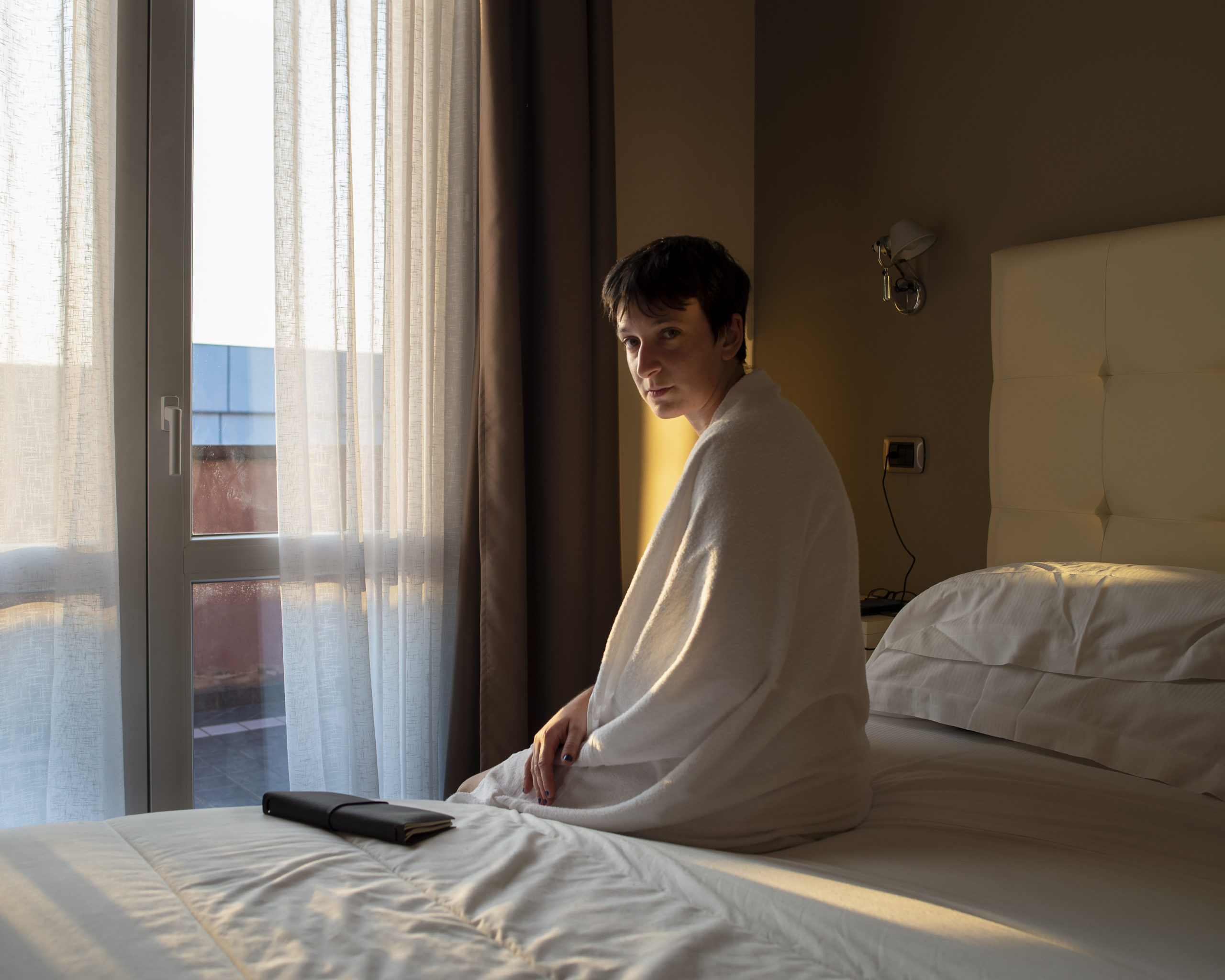 "My girl is a boy": a story of love and metamorphosis

“The transition invites you to choose yourself, and to love yourself. But sometimes to choose ourselves we have to let go of something else, no matter how painful letting go is. Life was moving on and we, as a couple, were left behind.” Read more about Melissa Ianniello and her visual project depicting her relationship with her former partner who decided to transition while they were still together.

Very often, stories of those going through a process of transition are told with morbidity and voyeurism, emphasizing the marks left by surgery or the shifts generated by hormonal treatments on a constantly evolving body.

The photographic project My Girl is a Boy was born with a completely different objective: to tell the metamorphosis of a trans man (female to male) from a predominantly psychological and emotional point of view. 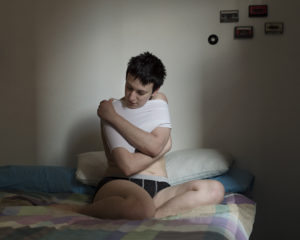 Initiated by Melissa Ianniello, the project was presented for the first time at Roma Fotografia 2021 Freedom. Through intimate, poetic and delicate shots, the creative work returns all intense and moving humanity to an extremely complex process.

A “lesbian activist and intersectional feminist with a deeply androgynous soul,” Melissa started the project just after Davide’s first testosterone injection, the partner with whom she was living at that particular time.

Assigned as female at birth, Melissa’s partner decided to take the transition path to a medical level. “I immediately supported Davide in his choice, but to be honest I feared that this process would draw us away from each other -which was precisely what happened- because he needed to totally focus on himself during this intensely strong, radical and challenging moment,” explains Melissa. 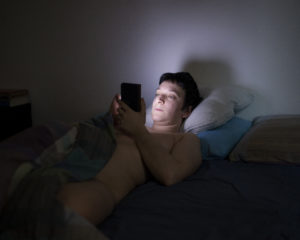 A profoundly ironic aspect emerges from the title of the project, an aspect that recognizes and restores all its irreducible complexity to an extremely multifaceted reality.

“My story shows that labels collapse in the face of the power of love and the search for identity. Born in a female body, Davide perceives and determines himself as a man. And now I, the lesbian, had fallen in love with a man, because the world of emotions escapes the reductive categories that we follow in order to simplify and understand our emotions.”

Melissa and Davide met thanks to the “Trans Group” association in Bologna, the city where she has lived since her days at university.

“I introduced myself as a mixture between drag king, bi-gender and androgynous,” she recalls.

“I was wearing men’s clothes, beard and moustache made by sticking chopped hair on my face with mastic. I acted as a canonically understood man by lowering the tone of my voice, with my breast bandaged and the package in evidence to change posture and movements. I introduced myself as Ian, which is the name of my male alter ego. After speaking with Davide, we exchanged numbers and decided to go out but I immediately made it clear that I would also introduce myself as Mel, because Ian only takes up a small part of my life. We started dating and after a few months, a love relationship was born. Although this was not my first experience with a man, as a lesbian this put me in a deep crisis as I have always been sexually attracted to women. Her body was still a female body at the time, but I was aware of the fact that I was relating to a man: he was a man with a woman’s genitals. It wasn’t just that. Having grown up with a feminine social imprinting, he was a man with a woman’s heart.” 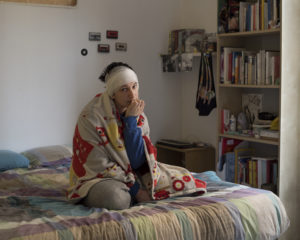 “Speaking about my work, my dear friend and curator Chiara Pirra once used the metaphor of the mirror. Some photographers take pictures through the window, she told me, because they have an open gaze on the outside world. But when you shoot more through the mirror, it’s because you have a look towards the inside: my projects always stem from a subjective experience that can lead to a universal discourse to inspire a reflection that is useful for society.”

After graduating in philosophy, Melissa distanced herself from the academic system “steeped in patriarchal and misogynistic machismo” and questioned herself on identity matters by reading Teresa De Lauretis, Judith Butler, Luce Irigaray, ranging from radical feminism to intersectional feminism to the most contemporary thinkers in the fields of gender and queer studies, Flavia Monceri or Preciado (once Beatriz, now Paul) for instance. 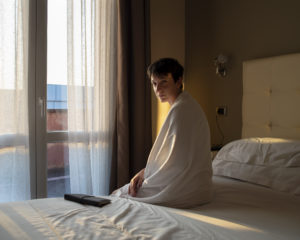 Her photographic references are the American Nan Goldin, “for the deep intimacy and authenticity of her shots”, and Zanele Muholi, the South African activist who for years has been shooting portraits of the LGBT community and lesbians in the country.

“We owe her the lucky term artivism, in which an artistic dimension and political activism converge,” states Melissa. She then adds: “Another photographer who has greatly inspired me is certainly Diane Arbus. And I would also like to say a few words about two of my great contemporary references: the photographers Jen Davis and Chiara Fossati. Their work is simply incredible and deserves to be known.” 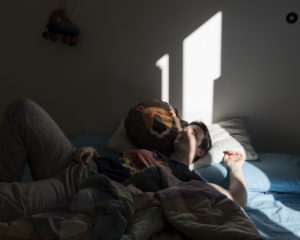 My Girl is a Boy is set within the four walls of their home also due to the strict restrictions imposed by the 2020 lockdown. However, the motionless and suspended atmospheres also reflect the author’s state of mind and Davide’s desire for intimacy and meditation.

Here he is portrayed at the very beginning of his metamorphosis. “Transition is first and foremost an emotional process,” says Melissa. “We needed a different narrative, more connected to the heart, the mind and the perceptual sensations he was experiencing along the way.”

One of the first photos shows Davide on the bed with his legs crossed while he takes off the binder -the containment tank top- and he seems to be hugging himself. 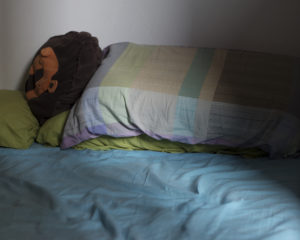 “I was always moved by that shot because it is very intimate and also very liberating, as if it represented his attempt to get out of the cocoon,” she says. “Another shot that touches me a lot is the one in which a ray of sunshine enters through the window while he is lying on the bed with his eyes closed, next to the pillow in the shape of a lion.”

A loving and silent tribute to the courage of changing in order to become oneself. An action that requires moments of profound and solitary integration.

Melissa and Davide’s relationship as portrayed in the photographs changes with the progress of the process until it is interrupted by mutual agreement.

“The transition invites you to choose yourself, and to love yourself. Sometimes to choose ourselves we have to let go of something else, no matter how painful letting go is. Life was moving on and we, as a couple, were left behind,” concludes Melissa.

“I kept shooting until the day I left home. My last photo shows our empty bed with the wrinkled sheet, describing the absence of a person who has just left, me, and the last moment of our life together.”

Click here to read the original Italian version of the article.