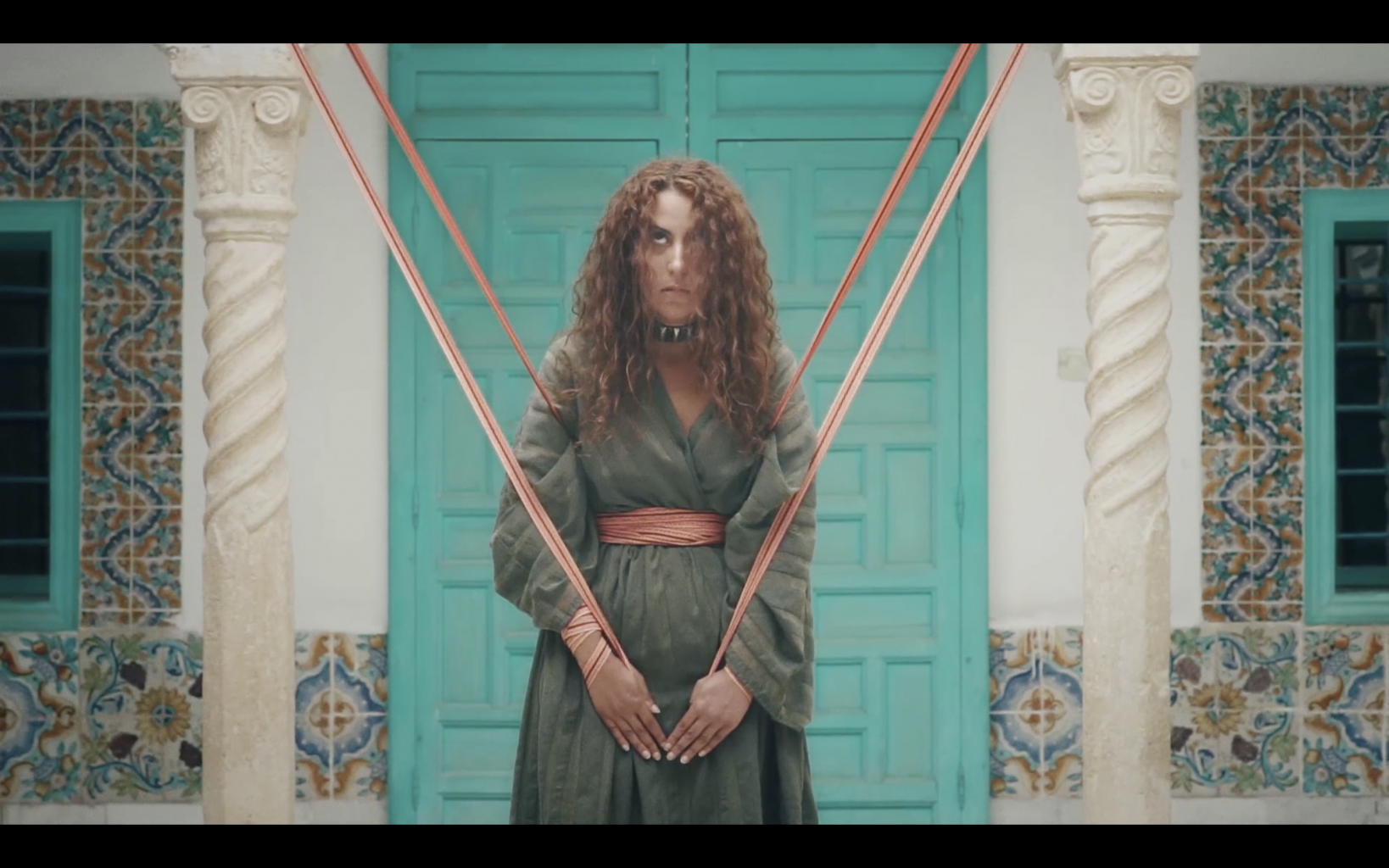 The “Qardoun”: an ode to the resilience of women and sisterhood

Through the “qardoun”, a mystical ribbon, the strength of women is woven and transmitted from mothers to daughters and sisters to sisters. A ribbon of memory that is sometimes unifying, other times oppressive. Sarah El Hamed’s short film “Qardoun, the handover” is a poetic tale about the power of sisterhood and the resilience of women.

Where does the memory of our ancestors go? What if each of us secretly continued to carry it within ourselves? Is the history of women doomed to repeat itself?

It is in a cloud of mysticism, symbolism and magic, rooted in North African culture that Sarah El Hamed addresses the issue of transmission and the status of women. Like a cycle, the struggle of women has travelled through time and generations.

The film opens by inviting us to an unreal and atmospheric space and time in the middle of a palace, carried by the deep and penetrating voice of Sarah. She embodies a mistress of ceremony, bringing together a circle of women for a ritual, in an ethereal setting. Each one represents a natural element: fire, water, air, earth and ether: the elements of alchemy.

The mistress of ceremonies then appears in the middle of a patio open to the sky, entwined with the qardoun. The ribbon that initially represents ties quickly turns into a chain of detention. Manipulated, this woman foreshadows distress.

The rhythm of the film accelerates plunging us into an infernal cycle of reminiscences. Painful and trying images follow each other: cries of fear, a woman in a cage, a woman underground, a burnt woman. The equally poignant images implicitly evoke the suffering endured by women in History: girls buried alive, witches burned alive.

The ritual continues in order to break this cycle of History. Liberated, women become aware of their power and unite their strength by means of alchemy. By contrast, dark images give way to brighter images. “From shadow to light, from nothingness to life, the woman of today”.

Through unity and solidarity, they manage to transcend their condition. The film closes with the image of young women brought together, forming a goddess with many heads, a woman with many faces.

The short film revolves around the metaphorical object of the qardoun: the ribbon made of Berber fabric used by Algerian girls to smooth their hair and make it silkier. This exclusively female object evokes moments of female complicity shared between mother, daughters and sisters.

On the other hand, it can also be seen as a tool of order, used to discipline the naturally curly North African hair in order to meet Western beauty standards. Thus, it echoes both the beauty and the suffering of female existence.

In a current context where violence and injustice against women is denounced across the world, the work of Sarah El Hamed is particularly poignant. The film won two awards this year, that of the Toronto International Women Film Festival in Canada and that of the White Uncorn in India. It has also been shortlisted seven times at international festivals including the Arab Women Film Festival.

In this short film, Sarah El Hamed reveals all her talent as a performer. In her artistic practice, she explores several means of expression such as oral poetry, photography, installation or urban intervention. Originally from Algeria, she draws much of her inspiration from ancestral traditions, symbols and rituals of her North African heritage.

About the film:
Born in 2019 in the framework of an artistic residency at the Villa Abdellatif in Algiers, the short film “Qardoun, la passation” brings together a dozen of Algerian artists: filmmakers, actors and visual artists under the direction of Sarah El Hamed. The artist also intends to plan live performances to accompany future screenings of the film.

Lina Meskine is specialized in architecture and is passionate about writing and journalism, which she explores as a self-taught person. Based in Rabat, she collaborates for several media, including Onorient: a platform that promotes the artistic momentum in the Arab world, Web Arts Resistances, or the magazine A+E: Architecture and Environment in Morocco.